THE City of Vancouver has confirmed that Sunday’s controversial plans to commemorate the 5-year anniversary of the 2011 Stanley Cup riots, will go ahead despite the public backlash.

Up to 10,000 rioters dressed in Canucks jerseys, are expected to descend on downtown Vancouver to participate, with the city hosting a range of events and activities “for the whole family”. Rioters are instructed to arrive via SkyTrain at Stadium Chinatown early and “immediately proceed to the staging area on West Georgia St” organizers say.

Festivities get under way at noon, where onlookers will witness a rather tame start with some public urination and drunken fighting. Rioters will then proceed north along Georgia towards Granville St. where “light looting” will begin and “a few vehicles” set on fire.

While alcohol will be served, it will be in high demand given the anticipated turnout, so potential rioters are advised to “pre-drink as early as possible”.

A spokesman for the mayor’s office confirmed that bats, bottles and bricks will be available to rent for a small fee, but items such as pipe bombs and molotov cocktails, will have to be brought from home. Security will also limit the number of explosive projectiles to 3 per person.

At precisely 7:45pm, large ceremonial fires will be lit across Downtown Vancouver and wide-scale rioting will commence until midnight. The Hudson Bay is once again expected to be a popular choice amongst would-be looters looking for a real bargain.

Amongst a host of local celebrities, Carly-Rae Jepsen will perform a free concert live at BC Place, atop a pyramid of burning cars. As capacity is limited, large screening areas will be set up across Downtown and the rest of Vancouver.

The infamous ‘kissing couple’ will also make a cameo appearance and the pair admit they’re looking forward to recreating the special moment. “Our relationship really suffered after the last riot,” they claim. “There’s nothing quite like the excitement of kissing in front of riot police, so we’re hoping this could be a fresh start for us.”

Critics of the commemoration estimate the ceremony will cost the city between $20 – $25 million, and will likely result in mass casualties once again. Despite the sceptics, the City’s stance remains unmoved, a spokesman reiterated: “We’re not worried. Our last riot was a resounding success and listen if anything goes wrong, we can always just blame Surrey again.”

Proposal To Replace All Offensive Statues In BC With Statues Of...

Vancouver Candle Co. To Move To Kamloops And Rebrand As Kamloops... 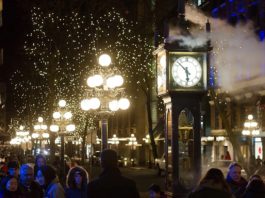 Vancouver Steam Clock May Be Forced To Permanently Close Due To...