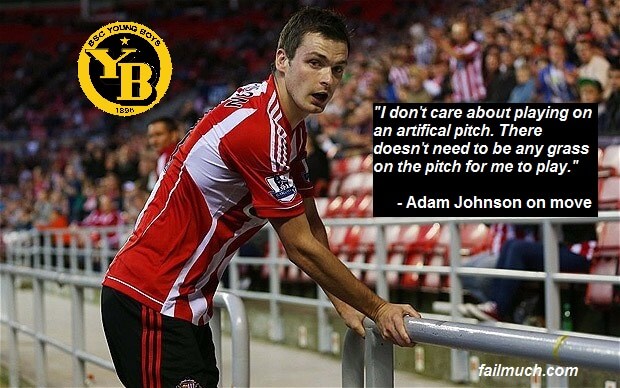 Swiss club, Bern Young Boys have announced the signing of Adam Johnson, on a 3-year-deal subject to a medical. The winger, who has recently been charged with three counts of sexual activity with a child, impressed Young Boys with his knowledge of the club and Swiss extradition laws.

“Adam has impressed us greatly. I have never before met a player more passionate about not only Young Boys, but also Young Girls, our women’s team.”

At the unveiling, the club’s press secretary insisted that no questions about Johnson’s upcoming trial would be allowed. However Johnson almost immediately slipped up, when asked about playing on his new club’s artificial pitch which caused a number of injuries last season:

“Listen, I just want to get my head down with Young Boys and play as often as I can. I don’t care about playing on a plastic pitch. There doesn’t even need to be any grass on the pitch for me to play. In fact, I prefer–” he said before being cut-off by the press officer.

Asked for his thoughts on the move, the winger seemed less than enthusiastic: “Well in an ideal world, I wouldn’t be going to Young- Boys, if you know what I mean, but I’m determined to make the most of it. I’ve taken my badges and will be working with the youth teams. It’s great that the club have given me the access I could no longer get at Sunderland.”

Even when speaking to his new club’s in-house TV station, Johnson seemed nervous. Upon being asked to name 3 things he loved, he answered: “Well firstly, I love young–” before pausing for 3 minutes. “Ashley Young” he eventually shouted. “I love Ashley Young. Yeah, that should do…. Aside from that, I also love the music of Michael Jackson and having sex with underage girls.”