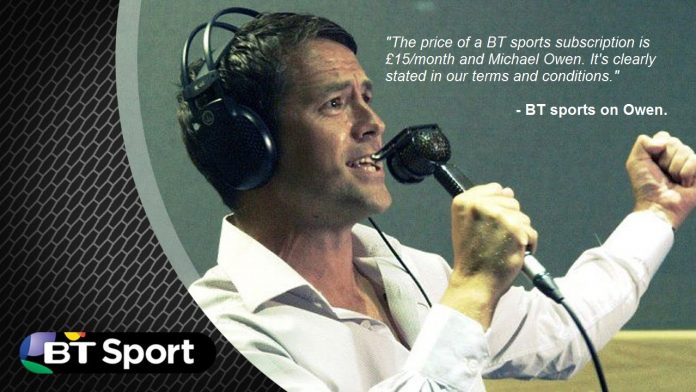 BT Sport bosses have refused to bow to increasing pressure to remove co-commentator, Michael Owen from future broadcasts. The telecommunications giant claim their package is “reasonably priced” and that package includes Owen; “The price of a BT sports subscription is £15/month and Michael Owen. It’s clearly stated in our terms and conditions. We couldn’t make it any more obvious.”

The statement fails to mention why BT are persisting with a co-commentator whom the NHS have warned is “solely responsible” for the sudden increase in cases of depression across the UK and Ireland, particularly as Ofcom revealed that 81.4% of BT Sport’s viewers watch with no sound when Owen is commentating. Paul Scholes has previously hit out at Owen’s commentating saying: “It’s a bad sign when you’re praying for Glenn Hoddle to say something.”

Hated by Liverpool fans, ridiculed by social media, only liked by Man United fans because it pisses off the Kop, gone are the days of Michael Owen being the darling of England. He remains defiant: “What would you have me do? Quit now and save the last tiny shred of dignity I have left? No. Just like at Man Utd, I’m going to drag every precious second out of this. Just like a man scraping the bottom of a jar of mustard.”

Owen, speaking to Ricki Lake for a new documentary about his career, revealed that he isn’t concerned by the criticism on social media and potential health risks to viewers:

“I get it. I understand that my analysis isn’t for everyone. But this is what you get with Michael Owen. I’m controversial. I pull no punches. I just tell it like it is. Literally.”

Heralded as “Manchester United’s greatest ever number 7” by BT Sports at his unveiling, Owen quotes have spread like wildfire in recent weeks, after a series of excruciatingly obvious, and completely random sentences. He addressed the accusations head-on:

“I know some people online think I’m crazy, but I stand by my statements. I still think that Memphis Depay look’s like a footballer and I genuinely think Marouane Fellaini is a jar of mustard. I don’t understand why people are so annoyed. If you can’t take the heat, then you should probably go somewhere where it’s not as hot.” – Michael Owen

The former Liverpool legend’s reputation has plummeted to such an extent that in a recent Telegraph Football poll, on the greatest football co-commentators, Owen placed behind Alan Hansen, Andy Townsend, Hitler and even Andy Gray.