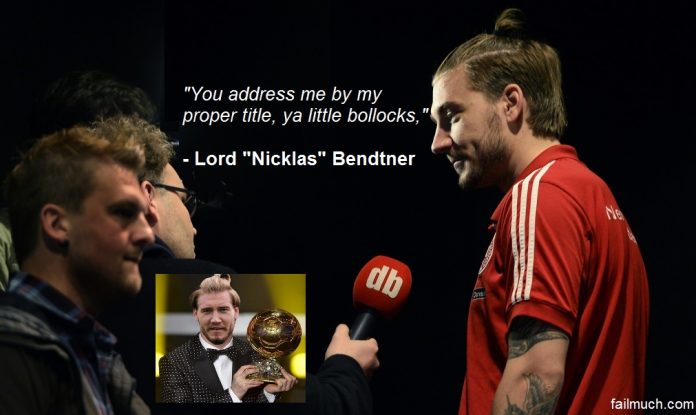 WOLFSBURG striker, Nicklas Bendtner, has announced he plans to legally change his name to “Lord Bendtner”. The Danish international claims “the media” have demonised him and cost him the acclaim he believes he deserves: “I think we all know why I didn’t win the Ballon D’Or last season… God. You rub your penis on one taxi driver and suddenly you’re labelled as some sort of creep. That’s the media for you.”

The former Arsenal “player” has developed a huge cult following on social media and says his fans and particularly the Lord Bendtner facebook page were key to persuading him to make the change. “Maybe not everyone in the media can see my greatness, but my fans do. The support that I’ve received from them is overwhelming. I do this for them as a thank you for always believing in me.”

The “Lord Bendtner” name was first coined by Arsene Wenger, or so the Dane believes. After Arsenal’s 3-1 defeat to Man Utd in the Champions League semi-final, a game in which Bendtner was particularly poor, Wenger reportedly tore into his players, saying: “That was one of the worst performances I have ever seen, and Nicklas, good lord…”

“Thank you boss,” replied Bendtner, “but please, lord is much too formal. Call me Mr Bendtner.”

Bendtner’s fans often debate where “Lord” stands on the list of all-time great players, with many supporters suggesting his ability matches such greats as Maradona and Pele.

However he immediately dismissed comparisons between himself and Maradonna. “I think that’s a bit of a stretch to be honest,” he said. “I mean, he wasn’t that good, was he? Did he win the Danish U-17 Player of the year award in 2004? I think not.”

Lord was even more dismissive of being compared to Pele: “I think I’ve heard of him… He’s that frog meme, right? Yeah, he does some good work.”

At the announcement, one reporter who referred to the Danish striker as “Nicklas”, was quickly put in his place. “You address me by my proper title, ya little bollocks,” he snapped.

Much like Calum Best and Diego Maradona Jr, there is already a huge weight of expectation on “the son of the Lord”, Nicholas Bendtner to match his father’s iconic status in football. However, the 4-year-old already looks capable of filling his father’s big pink boots, having signed a 15 year development contract with Arsenal. Wenger seemed optimistic about the young boy’s promising future: “Well he couldn’t be much fucking worse than his dad.”

The German club confirmed Bedner’s shirt name will now simply read ‘LORD”. The forward says he expects the name change will help his image: “My name is now legally ‘Lord Bendtner’ but I wish to be referred to as simply ‘Lord’, like Cher or Madonna.”

Here is the only factual thing you’ll see on FM Football News….

It’s the Top 8 Nicklas Bendtner quotes that are actually real*.