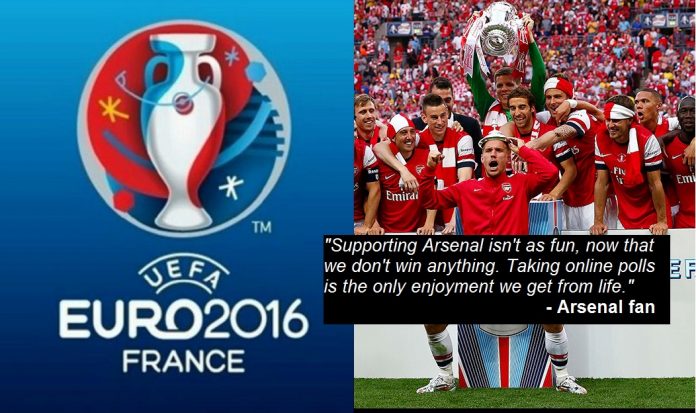 ACCORDING to a latest poll on UEFA.com, Premier League side, Arsenal, have emerged as frontrunners for Euro 2016 in France. The North London club topped the poll with an astonishing 91% of the votes despite not even being one of the options available.

Gunners’ fans on social media wasted little time in revelling in their new tag as “favourites”.

“It’s great news. I can’t remember the last time we were favourites to win anything,” said one fan. Another Gunner wrote on the Daily Mail’s Facebook page: “Arsenal are no strangers to European Championship success having won Euro 2000, albeit under the guise of some country called France.”

The FA Cup winners have topped a number of online polls in the past year, leaving many to question the validity of opinion polls nowadays.

Last week the club’s mascot Gunnersaurus, emerged as the leading candidate for the United States Democratic Party nomination, after topping a NY Times survey. It’s still not yet understood why the Arsenal mascot was even an option in the first place.

“Arsenal fans have ruined polls,” said one disgruntled Spurs fan. “They used to be a great way of expressing an opinion without having to think for yourself. Now what are we supposed to do?”

In fact, if recent online polls are to believed, there are presently more Arsenal fans in the world than McDonald’s restaurants in the United States, stars in the solar system and even footballers currently out on loan from Chelsea.

“Supporting Arsenal isn’t as fun, now that we don’t win anything. Taking online polls is the only enjoyment we get from life. That, and following Emmanuel Adebayor’s career.”

Interestingly, archeologists have discovered evidence that suggests the first poll ever conducted by early humans, was used to determine whether fire or the wheel was mankind’s best invention, with fire the eventual winner. Arsenal finished second on that occasion.

The results of the poll have raised a number of questions: