Home CANADIAN NEWS Vancouver Canucks Promise To Appoint Fan As Head Coach If He Gets... 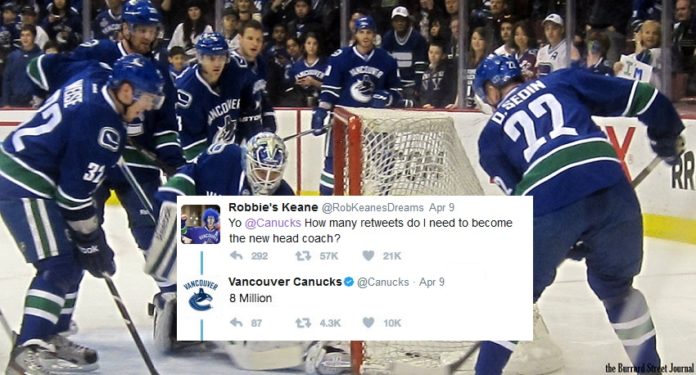 VANCOUVER, BC—Following the trail blazed by fast-food giant Wendy’s, the Vancouver Canucks have confirmed they will appoint a local fan as their new head coach should his tweet receive 8 million retweets.

After the firing of head coach, Willie Desjardins, and inspired by Wendy’s promise to give one follower a year’s supply of chicken nuggets for 18 million retweets, Samuel Torgersen-Williams, a 16-year-old from East Vancouver sent a hopeful tweet asking his NHL team how many retweets he would need to become their new coach.

Much to his surprise, the Canucks official twitter account responded within 2 minutes stating 8 million was the target, valuing the head coach role at roughly equal to 6 months unlimited chicken nuggets or $6,500.

Arguing that at this stage they “honestly haven’t got much to lose”, the 2nd worst team in the Western Conference division say that in the “unlikely event” the teenager reaches the target, they will honour the deal and offer him a 12-month contract on a base salary of $3 million plus bonuses.

“He doesn’t seem to know much about hockey, but then again clearly neither do we,” Canucks General Manager Jim Benning told the Burrard Street Journal. “Ah let’s just see what happens.”

While Samuel admits to having played little professional hockey in his short career, he has attended “at least one ‘Nucks game” every year since he was 14, and recently starred as backup goalie for the highly reputable North Van Wolf Pack. The soon-to-be high school senior admits he has a number of “exciting ideas” for the draft, including fast-tracking a number of his teammates straight into the first team, stating that the Canuck’s emphasis on attracting younger players “doesn’t go nearly far enough”.

Team President Trevor Linden insists that regardless of whether or not the Canucks appoint the two-year Pacific Junior Hockey League veteran, the long-term rebuilding remains on track. “It’s very much in keeping with our philosophy of throwing some young kids at the problem and seeing what sticks.”

Linden dismissed concerns that some Canucks fans may be slightly upset at the news. “USA Today predicted we’d finish last, and we finished second to last, so I guess we have to accept that fans expectations have risen,” he responded, adding, “Ah what are they gonna do, protest?”