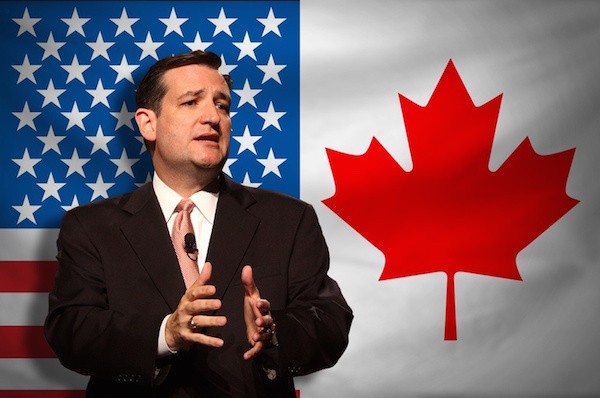 SPEAKING to the O’Reilly factor, Ted Cruz has confirmed he’d “love nothing more” than to add the province of Alberta to the United States if elected.

The Republican nominee claims that while “much work needs to be done” he remains “optimistic” at the prospect of brokering a deal with Canada, in a potential swap with the state of Alaska.

In an interview to be broadcast on Fox News early next week, Cruz states he’s had “positive preliminary talks” with the Canadian leadership and says there is interest from both sides. He denied the proposal was an attack on his former ally and current Trump backer, Sarah Palin, but confirmed she would be extradited under his proposal.

Legally and economically, the logistics of any potential deal appear extremely complicated, however Cruz is optimistic, saying the deal “makes sense” for both sides. “They’re very similar, they sound exactly alike,” he told O’Reilly. “Besides, anyone who’s ever been to the Calgary Stampede know’s that Alberta belongs in the US, preferably somewhere near Texas or Kentucky. Although there may be an opening under Georgia real soon.”

The vast majority of Cruz supporters seem against the unprecedented deal, with a Fox News survey revealing only 12% of Ted Cruz supporters back the Texan senator’s decision to make the switch. 72% of those surveyed don’t feel the change is necessary, believing Alaska to already be in Canada. The remaining 16% of respondents opted for Russia.

North of the border, Cruz claims his Canadian heritage and knowledge make him “ideally suited” to broker a fair deal. “Listen I know what Canadian’s like. I used to be one,” he said confidently. “And I’m telling you, Canadian’s like the cold. Alaska is perfect for them.” He even joked that Canadians could then “build their igloos till the beavers come home,” as O’Reilly laughed hysterically.

Remarkably, O’Reilly took an unscheduled call from Canadian Prime Minister Justin Trudeau during the interview. He immediately dismissed Cruz’s proposal, saying he would block any attempt at any “deal of this nature”. “The government of Canada will authorize the use of its full military if needed, in order to prevent Sarah Palin from entering our country,” he shouted before hanging up.

A noticeably shocked O’Reilly asked Cruz how he expected to secure a deal given Trudeau’s position. “Listen, we understand there may be some resistance on the Canadian side. I mean come on, who wants Alaska?,” Cruz joked. “But if they close this deal before the election, I’ll even throw in Florida for free. That’s a lot of sunshine Canada’s getting.”

Encouragingly, for the Albertan-born U.S. senator, some in Canada’s Liberal Party are thought to be receptive to the idea. One leading party source told FM News, “we believe we could secure the Canadian leadership for hundreds of years with Alberta gone”.

What do you think? Should Alberta be a part of the United States? Would Alaska be better off in Canada? Join the debate on facebook here.