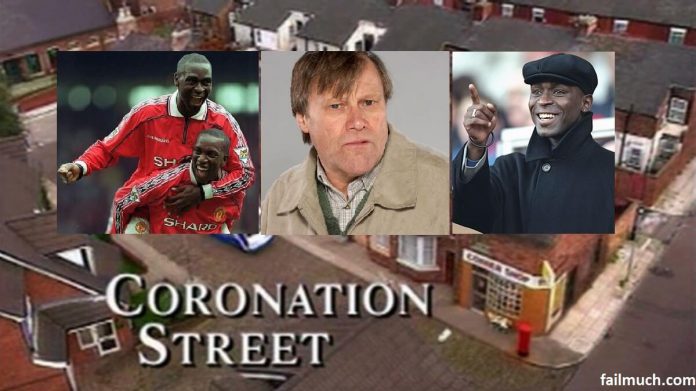 Former Manchester United star, Andy Cole, is set to realise a “lifelong dream” by becoming a regular cast member on soap drama, Coronation Street. Football and soap opera fans alike have questioned whether the move is a desperate attempt to appease football fans after ITV lost the rights to air Champions League games, especially considering Cole has the charisma of a cardboard box. The ’99 Treble winner however,  dismissed these concerns saying: “Starring in Corrie is the highest honour any Mancunian can ever receive. I hope to have a long career here alongside my hero, Sir William Roache (Ken Barlow), and hopefully if I’m lucky, ride half the cast in the process.”

The 43-year-old Champions League winner said his former Manchester-born teammates had played a large role in accepting the role: “The Class of 92™ lads were always saying to me that they’d pack in the footy in a heartbeat, for a spot on Corrie. I remember waiting in line with the Neville brothers and Scholesy for 3 hours just to get Roy Cropper’s autograph after the win over Juventus in ’99.”

The announcement sent shockwaves through the soap opera world with rivals Eastenders scrambling to find a competing former football star for the London-based show: “We’ve long earmarked John Terry for a role ever since the Wayne Bridge ‘affair’ after he leaves Chelsea, but now we may have to accelerate these plans.”

Cole said he was excited with his original role that he says really pushes the envelope: “I play a quiet, reserved mechanic who doesn’t get the respect he deserves. He works as a local handyman doing odds and ends for the locals of Weatherfield. Slowly he wins over the hearts and minds of Coronation Street until a mysterious figure from his past threatens to take it all away from him.”

This “mysterious figure” is believed to be none other than former United teammate/rival, Teddy Sheringham. The two most recently starred together in a pilot for a reboot of Men Behaving Badly that was not picked up.

Dwight Yorke, Jordan (Katie Price) and their son Harvey, are also naturally rumoured for upcoming supporting roles. Dwight Yorke, for once, refused to comment on the rumours, merely saying: “I would follow my brother Andrew to the ends of the Earth, especially if there are women involved.”