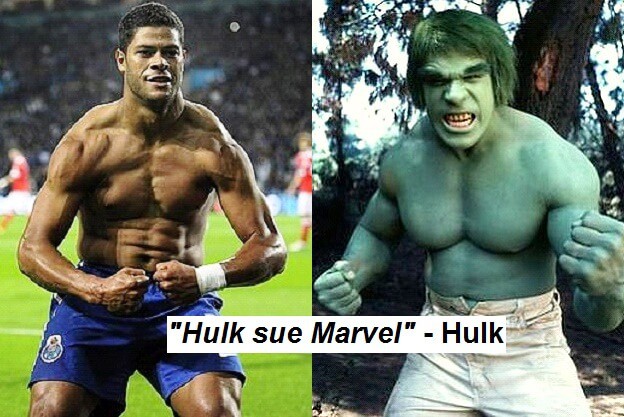 They claim the Disney-owned company have stolen their client’s “name, likeness and mannerism”.

Representatives for the 29-year-old claim that “Marvel have deliberately infringed on our client’s copyrighted name. They have done so since 1962. That’s over 24 years before our client was even born. For this reason, we are seeking $17 billion in damages.”

The Brazilian striker first encountered the popular superhero, while visiting Disney World with his Brazil teammates after their Copa América defeat to Paraguay.

His manager, Dunga recalled the moment Hulk first saw a 90ft cut-out, of what he believed to be himself:

“He was angry and confused, which is unlike him,” Dunga said. “As we tried to explain that the statue was not him, he flew into a rage, ripping off all his clothes. He  attacked several children, throwing one young girl at the cut-out. Luckily the girl’s wheelchair broke her fall.” – Dunga, Brazil manager.

Hulk’s representatives insisted their client would not be commenting on the matter, and he really should have listened: “Hulk only Hulk,” he confusingly said, “HULK SUE. HULK WIN. If Hulk no win, HULK KILL AGAIN.”

Disney, who own Marvel, say the amount of compensation sought is ludicrous; “The Hulk movies barely even made a billion dollars. And with what we’ve been ordered to pay as restitution for the whole ‘Nazi Donald Duck’ thing, there’s practically nothing left… God will that ever go away?”

Either way, Hulk’s agent Damien Martyn, is quietly confident the case will be thrown out. “Mr Sousa has stated in hundreds of interviews that the ‘Hulk’ nickname comes from his likeness to Lou Ferrigno, who played the Incredible Hulk in 1977. The defense rests.”

Dubbed the “Gary Neville of ESPN Russia”, Hulk expects to continue in his role as a pundit for the Disney-owned company. “Hulk continue.” he predictably said.