Home FOOTBALL NEWS Hodgson on Jack Grealish: “Ireland are welcome to have him. He’s not... 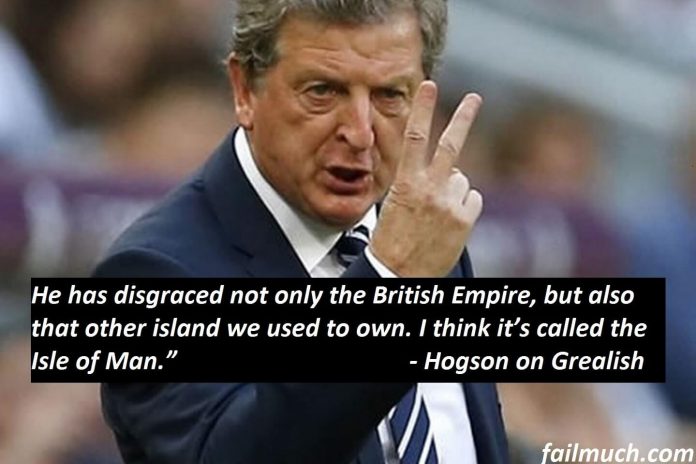 The young Aston Villa man has been at the centre of a ‘1916 style’ tug-of-war between the Rep. of Ireland and England. Both camps appeared confident of luring the winger to their respective nations. England were hopeful because he was actually born there, and Ireland were optimistic due to Grealish announcing plans to study Agricultural Science in GMIT in Galway City.

However, England boss Roy Hodgson confirmed to the media that Grealish’s much publicised recent behaviour was “outrageous” and that the starlet would no longer be considered for England duty. Hodgson said that the picture of Grealish in Tenerife that surfaced this week was unacceptable, and not the behavior befitting an England player:

Hodgson had initially seemed enthusiastic about the Aston Villa winger’s chances of selection for Euro 2016 saying: “We like the boy and we would like him to play for us. Mainly because the Rep of Ireland have been stealing England’s brightest young prospects for decades. Look at Jason McAteer and Phil Babb. We would have won the bloody World Cup in ’94 with those boys.”

For Roy Keane’s explosive reaction to Hodgson and his thoughts on Grealish’s Republic of Ireland future, see Fail Much Football News:

Roy Keane speaks out on Jack Grealish’s Ireland future: “He passed out from drinking. How Irish can he be, like?”

Posted by Fail Much Football News on Thursday, 18 June 2015