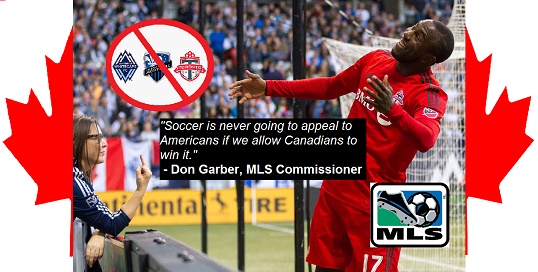 MLS commissioner, Don Garber, has refused to deny reports that MLS executives are debating removing all Canadian based teams from the league.

Speaking outside an emergency meeting held in New York by the MLS and all U.S. based team owners, Garber said: “I’m not going to discuss the details of the meeting. Our Canadian teams are valued members of this organization. Just because Canadian players take up an international slot for American teams, and American’s don’t for Canadian teams, doesn’t mean there’s any bias against Canadian players whatsoever.”

Canadian teams have “taken over” the MLS this season with Giovinco, Drogba and Kendall Watson all impressing hugely for teams north of the border. This coupled with all 3 Canadian teams qualifying for the playoffs, has left worried MLS execs questioning whether a Canadian team could actually win the MLS Cup for the first time.

Bruce Arena, who also attended the meeting, said the league’s priority should be developing the U.S. national team: “The MLS exists to help develop the American national team, not Canada. We only allowed Canadian teams in the MLS to make up the numbers and to give Chivas USA the chance to actually win a game.”

Mark Abbott, the MLS president, was far less diplomatic than Garber: “It’s time for Vancouver, Toronto and that French team to leave. Toronto’s star names and the Whitecap’s shrewd transfer policy, are making the American teams look bad, and no one makes America look bad, except Florida.”

Speaking prior to Toronto FC’s first season in the MLS, back in 2006, Gaber said: “Soccer is never going to appeal to Americans if we allow Canadians to win it. Can you imagine if a Canadian team won the SuperBowl? It makes me physically sick to even think about it.”

U.S. national team manager, Jurgen Klinsmann, said Canadian fans had a growing reputation for violent hooliganism. “Those stupid Canucks can’t even be civilized. Remember when a Whitecaps fan stuck her finger up at Altidore? 10 years ago that would have been deemed an act of war against the United States. She’s a lucky lady that Trump isn’t in power, yet.”

One Canadian soccer fan didn’t seem overly enthused at the prospect of a possible Canadian Soccer League (CSL), saying “I guess it can’t be much worse than the CFL”.