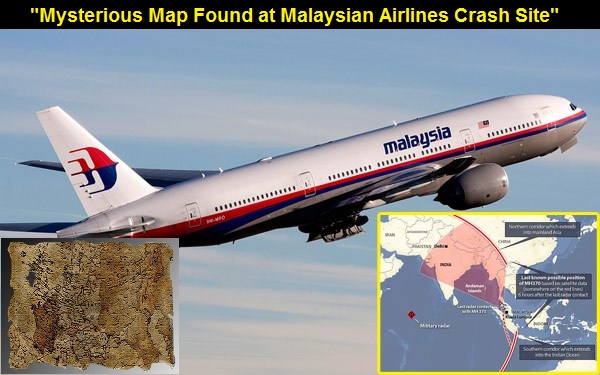 Not to be outdone by this weeks discovery of Russian Missile Parts in the wreckage of flight MH17, new developments have also come to light in the mysterious Malaysian Airlines Flight 370 crash. A mysterious map has been found, sealed in a bottle and floating in the South China Sea.

“We’re unsure about the origin or significance of this map,” said Detective William McArthur of the Malaysian Investigation Team, “but it depicts a red X written in what appears to be blood somewhere over Antarctica.”

Also found in the bottle were a small crystal skull and a list of 5 riddles, which promise to reveal further details as to the circumstances surrounding the crash.

“If ye wish to see the crew alive, follow ye these riddles five” begins the note.

” ‘I wave to you but no arms have I, I’m deep and blue, but Im not the sky; I’m as wet as you can see, ships ride on me, seven of me there be, and my name rhymes with the letter C’…hm….I don’t know. I feel like that could have multiple perfectly valid answers. This is why I hate riddles,” said Malaysian government investigator George Burnstein.

The American Society of Riddlers released an ambiguous statement concerning the event.

Investigators have 72 hours to solve the riddles and retrieve whatever is located at the X or they will face “consequences most stark” according to the riddles.

“Retrieve ye the treasure I here have marked; or beware of consequences most stark.”

Nicholas Cage was unavailable for comment as his current whereabouts remain unknown.