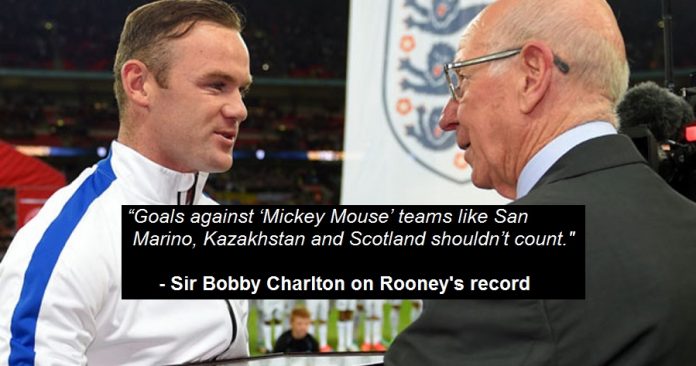 As Wayne Rooney finally became England’s all time leading goalscorer, current and former teammates took to social media to congratulate the United captain on scoring his 50th goal for England. However, the man he replaced, Sir Bobby Charlton, has amazingly dismissed Rooney’s achievement.

The normally mild-mannered World Cup winner, astonishingly hit out at Wayne Rooney’s goal scoring record, due to the quality of opposition he’s faced. “Listen, I think Wayne is a tremendous footballer, but let’s get real for a second,” said Charlton. “Goals against ‘Mickey Mouse’ teams like San Marino, Kazakhstan and Scotland shouldn’t count. Goals against them should be worth half. By my count, he’s actually scored 9 goals for England. Quite a feat indeed.”

Charlton also took to Instagram to voice his frustrations at the media attention Rooney has received. Under Rooney’s “thank you” Instagram photo, Sir Bobby wrote: “Congrats on reaching 50. But how many World Cups do you have, Wazza???”

Sun Football writer, Dixon Piper, says the absence of a “lol” or exclamation mark from Charlton’s post, “speaks volumes” about how the United legend feels about Rooney.

A suspiciously tipsy Charlton also posted a video on his Facebook account where he had a dig at the media’s coverage of Rooney’s milestone. “To be honest, the whole record thing is very annoying,” said the Man United director. “It’s clogging up my newsfeed no end. Can’t go on Instagram either without seeing his ugly face. At least my hair doesn’t look like that dead ferret, he call’s his hair. Wish he’d fuck off to Chelsea like he keeps threatening.”

Rooney refused to comment on Charlton’s surprising outburst, saying he’s simply focused on reaching his next milestone: “Obviously it’s great to get the record but I’m still 17 goals behind Robbie Keane. Once I overtake him, then I’ll know I’ve really made it.”