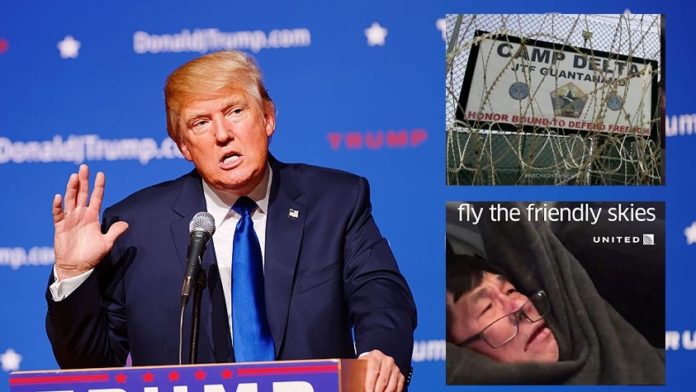 WASHINGTON, DC (By Maxamillian Wallace and Anthea Morritt)—White House Press Secretary Sean Spicer confirmed the Trump administration’s commitment to drastically increase the severity of its interrogation techniques today, by announcing that United Airlines has been officially approached to take over management of the contentious Guantanamo Bay Detention Facility.

This move comes just days after footage surfaced online of a 69-year old American doctor being forcibly dragged from an overbooked United Airlines flight, in what President Donald Trump is calling a “very impressive audition tape.”

“The advanced torture techniques on display, show that United is ready to do away with ridiculous Obama-era weaknesses, such as Human Rights and The Geneva Convention.”  Said Spicer, adding that “the company’s ample experience confining [passengers] into small metal boxes with absolutely no contact to the outside world, makes them a perfect candidate for the job.”

“We’ve been a proponent of waterboarding for some time, but we never even considered pre-waterboarding, for those who require a little extra time!  Clearly these people would take things to a whole other level” Spicer told reporters, outlining some of the potential changes he hopes that United Airlines will bring to the table.

If they accept the position, Trump would reportedly expect the airline to “heavily increase current sleep deprivation tactics” by forcing prisoners to “stay in the upright, extreme stress positions while the seatbelt sign is on”, and interspersing crying baby/irresponsible parent teams throughout the controversial facility 24 hours a day.

While United Airlines has been encouraged to bring its current level of brutality to the Cuban shores of Guantanamo, Trump has requested one slight reduction, urging United to improve the quality of their food, as many experts agree their current menu constitutes cruel and unusual punishment.