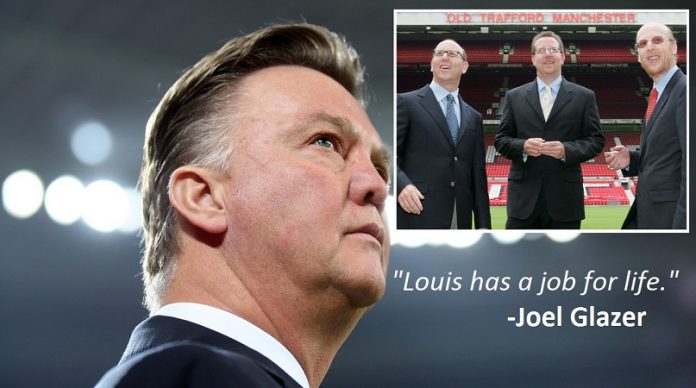 MANCHESTER United owners, the Glazer family, have publicly backed manager Louis Van Gaal, saying they are “absolutely thrilled” with his management thus far. The notoriously outspoken owners, claim appointing Van Gaal ranks amongst the “best decisions” they’ve made at the club, an endorsement which will surely strengthen the Dutchman’s place.

In his weekly interview with MUTV, Joel Glazer sat down with Paddy Crerand and began by speaking in glowing terms about their under pressure manager. “Louis has done a great job. We’re thrilled. He has a job for life,” the United Co-Chairman beamed. “He’s delivered far beyond our expectations. Fans are completely focused on him and the team, and not bothering themselves with boring commercial issues. Everything is going great.”

Glazer seemed unconcerned by the suggestion of fan unrest following a lack of recent success at Old Trafford. “Define success?” he asked. “Do fans really want trophies? Trophies are literally worthless. The Football League have repeatedly blocked our attempts to sell the League Cup, so what the hell is the point?”

While discussing the family’s early years at United, Glazer admitted to some initial “teething issues” with fans, but eventually they found their feet. “We’ve noticed it’s far easier to redirect fans’ anger than to please them,” he said, adding that now the family finally feels “fully settled” at Old Trafford. Last year they celebrated their 10-year anniversary at the club, generously rewarding themselves £40million each for reaching the historic milestone.

Financially speaking, Man United have grown exponentially during their reign. Joel attributes the success to the clear vision his father had for the club, back in 2005. “When we took over, our father quickly identified the club’s youth setup, as being particularly money-draining. Instead we decided to pour that money into a far more modern, efficient and statistically-proven system. Agent’s fees.”

Crerand eventually asked Glazer about United’s on-field performances and more importantly the family’s plans for the future. A visibly perplexed Glazer quickly searched his notes before reading from a page titled: “The Soccer Part”.

“We feel that the club’s current 3-point plan is key to the club’s continued success. First, buy fan-favourite signings like Mata, Herrera or Schweinsteiger, combine them with various expensive young stars, throw in a few local lads regardless of their talent, and you have the future of Manchester United.” – Joel Glazer

While David Moyes’ disastrous 10-month reign was a difficult time for all associated with the club, the Glazers claimed they “learned a lot”. “We realised we didn’t have to have a successful manager to keep the fans off our backs. That was a huge turning point for us.”