Home FOOTBALL NEWS Arsene Wenger on Danny Welbeck’s injury: “Who could have seen this coming?” 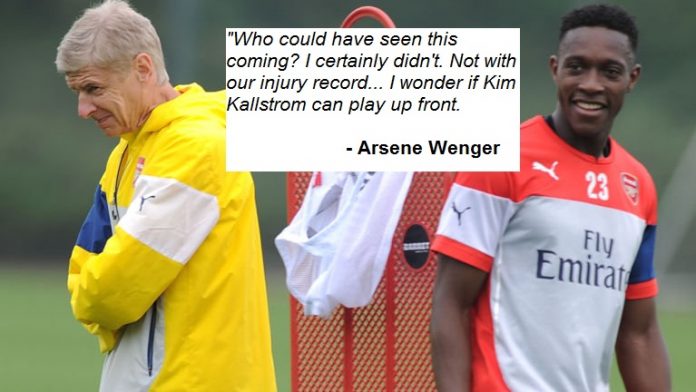 Arsene Wenger’s gamble to strengthen his strike force this summer, has immediately fallen to pieces with the news of Danny Welbeck’s injury. The striker, signed from Man United, has been ruled out until the New Year, with various media sources saying Wenger knew about the injury before the deadline.

Speaking as a pundit on Canal Plus, Wenger seemed in disbelief at the unfortunate news:

“Who could have seen this coming? I certainly didn’t. Not with our injury record. Now I know what the media will say. They’ll say: ‘But Arsene, you knew about Danny’s injury before the deadline so you could have most definitely seen this coming?’ Maybe they are right, who knows.”

While he admits to being “blindsided” by Welbeck’s latest setback, he said that he feels he has recently “gone against [his] instinct”: “I said to myself: ‘Arsene, you have too many injury-prone English players at the club.’ As always, I was right. I should have trusted my instinct and bought more French players.”

On the subject of Wenger-esque french players, he was asked if he had been interested in Man United’s new signing, Anthony Martial.

“Yes, of course. I am interested in every French player in world football, especially when the player is yet another, ‘next Thierry Henry’. Hopefully instead he’s the next Bellion.”

Wenger said he was on the lookout for a forward during the window but claims there was a lack of value. “We looked at many players but we couldn’t agree with their clubs, for a fee. We even made a bid for Adebayor for ze- how you say… bantz?. Levy was so fucking happy until we told him we were joking. What a dipshit.”

The former Monaco boss said he didn’t think Welbeck’s absence was terminal to his side’s chances of claiming the Premier League title: “No, I don’t think so. Chelsea look shit. Manchester United are a fucking mess. City look good but it’s only a matter of time before Pellegrini cracks. And don’t get me started on Liverpool…”

When asked if he had a message for worried Arsenal supporters, Wenger replied: “Yes of course. I would to say to them ‘Don’t worry. We have many options. Walcott, Sanchez, the Ox and plenty other quick, lightweight wingers who I can play up front when I want to punish Giroud.’

Finally the Arsenal manager believes Arsenal can manage without cover for Giroud until January. “Ha. Maybe we will think of something,” he said with a wry smile. “I always have a Kim Kallstrom or two up my sleeve for emergencies.”