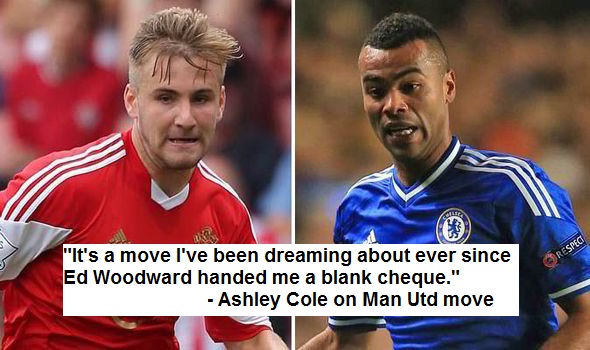 Manchester United have moved quickly to replace the injured Luke Shaw, by signing the man he has been tipped to replace for England, Ashley Cole. Cole has signed a 3-year deal and joins on a free transfer from Roma in a move that has left Arsenal fans wondering how they could possibly hate him any more.

Chelsea fans weren’t long voicing their displeasure at the move, labelling Cole a “mercenary” and “Cashley Cole”, displaying an almost goldfish-esque memory. “What a money grabbing c*nt,” said one Chelsea fan on facebook. “No loyalty left in football,” said another. Even former teammate, Frank Lampard, hit out at the move on twitter: “@TheRealAC3 It shows a real lack of class to join your former club’s great rivals. I dunno how you can look at yourself in the mirror, mate.”

On Wednesday, bookmakers slashed the odds of Cole joining the Red Devils and in doing so, provided the world with an insight into how betting odds are calculated. “Well is seems like a logical move to us,” said Ladbrokes’ CEO Warren Nestor. “Shaw is a left back and Cole is a left back. Shaw is English, Cole is English. Cole is available and likes money. Man Utd have a lot of money. Seems like a dead cert.”

It is not yet known whether Van Gaal will actually play Cole in his natural position, or use him to solve the United’s problematic right wing slot. “Well we shall see how he fits into my philosophy. Mata can also play left-back so maybe Cole can play on the right. I pretty much just make this stuff up as I go.”

The new United number 3, was visibly delighted at the move. “It’s a move I’ve been dreaming about ever since Ed Woodward handed me a blank cheque,” Cole said. “I’m blown away by the size of the club. I thought Chelsea were rich but United are on another level.”

Many in the football media have wondered whether at 34, Cole is too old to force his way back into the England setup. Hodgson appeared to offer hope that the former Arsenal left-back could be in contention for a recall. “Well he plays for Man Utd so he’s essentially undroppable now,” Hodgson said.

One group even happier than Spurs fans, were the British tabloids who were rubbing their hands together with the potentially infinite “Shaw” related puns. The Sun’s coverage on Cole’s move, was titled “Who could have SHAW this coming?” to get the ball rolling.

The former England star had been mooted as a potential Newcastle United signing, as he attempts to win back his estranged Geordie wife in their new reality show, “The Coles”.