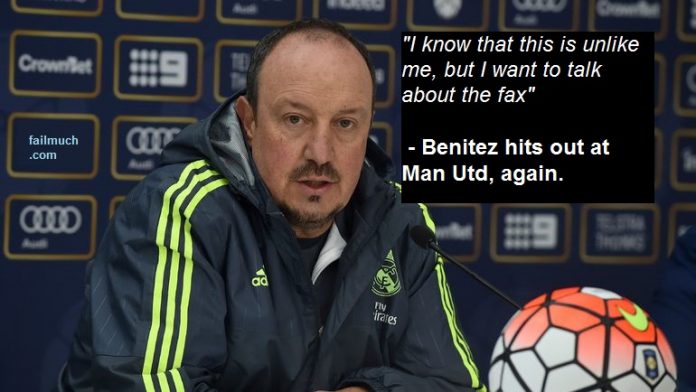 Real Madrid manager, Rafa Benitez, has spoken for the first time since the collapse of the David De Gea transfer from Man United. The Premier League side blamed Madrid for the collapse of the move, claiming they faxed the contracts to their Spanish counterparts, in plenty of time before the transfer deadline.

However, speaking at a press conference at the Bernabeu, it was clear where the Spaniard points the finger of blame:

“I have seen the statement from the Manchester club. I was surprised but I have to talk about the fax because I think… I think they are nervous because we have faxed the facts, surrounding this fax, to those facks at Fifa.”

Reports in some sections of the media had suggested that United were simply winding up Beneitez, a practice common during the Sir Alex years. Benitez’s statement appeared to support those claims:

“I have spoken for a long time about the need for greater technology in football. Fax machines are too old. Why do United send a fax? Why not email? Why not SnapChat? It is clear to me that these are mind games from Mr. Ferguson.”

If this was indeed an attempt by Sir Alex to unsettle Benitez, it appeared to be working as the former Liverpool manager continued his attack on his former adversary: “I know what has gone on here. I am not a fool. Mr. Ferguson is still torturing me with the mind games. He controls the transfer market. He still controls the fixture list.”

“Well could you maybe explain about the fax?” said Lowe.

Over the course of his statement, Benitez said the word “fax” a record 387 times. By the end, many reporters felt the word had lost all meaning especially when one drearily asked: “Do you have any facts on Manchester United’s fax?”

“I couldn’t give two facts about their fax,” Benitez responded. “I only look at my facts, that I came up with this morning. Fact”