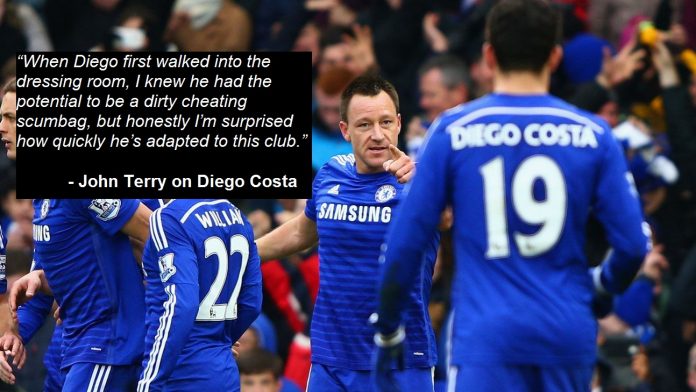 Diego Costa has been officially unveiled as Match! Magazine’s “Biggest Asshole in Football” for 2015. The annual award was given to Costa, following his role in Gabriel’s sending off during Chelsea’s win over Arsenal, along with a series of other unsporting incidents.

Jose Mourinho was understandably overcome with emotion at the announcement. “Like a father who has just seen their child take their first steps, I am bursting with pride,” said the Chelsea boss. “I have tried with many of my other children like Cole, Pepe and of course JT, but now one of my players has finally been given the honour he, and this whole club, deserves. He was such a nice and well centred individual when I first met him, but I quickly beat that out of him and now he’s reaping the benefits.”

John Terry, who has been the runner-up for the past 10 years was disappointed to not have been honoured but also proud of his close friend and ally. “When Diego first walked into the dressing room, I knew he had the potential to be a dirty cheating scumbag, but honestly, I’m surprised how quickly he’s adapted to this club,” Terry told Chelsea TV. He continued to speak about his own shortcomings in recent times:

“Naturally, I’m gutted to not be nominated myself but I’m professional enough to know that I haven’t been good enough this year. I had my chance in 2010 with the whole Anton Ferdinand thing, but that was the same year Shola Ameobi stabbed a priest, so the competition was fierce. And to be honest, if you can’t win the award by riding your teammate’s wife for 3 years, then it might be a sign to give up.” – John Terry

Costa’s former manager at his first club, Carlos Carvalhal, said he always suspected Costa would fulfil his undoubted potential. “He was always a bit special,” Carvalhal said. “I remember one day, watching Diego beat the shit out of a small kitten with 3 legs and one eye. Most of his teammates looked horrified but Diego didn’t even flinch as he ripped off the kitten’s remaining legs. In hindsight, I probably should have had him put down. And the kitten too.”

The Brazilian born striker, admitted he was “humbled” by the honour: “It’s not for me to say if I am the biggest prick in the world. That is for others to speak about. I just try and stay focused on playing my own game and continue scratching, kicking and spitting on my opponents. Everything else is just a bonus.”

He went on to thank his club, manager and teammates for the “unwavering support”. “It’s a record I’ve been chasing for years,” said the former Atletico frontman. “It’s a dream come true. I’d like to thank my manager, Jose. You are my inspiration, my all and my everything. Most of all, I’d like to thank Gabriel, my guardian angel.”

Costa, who rose 8 spots to number 1, becomes the first person to simultaneously hold the honour along with World’s Ugliest Man title. Last year’s winner, Luis Suarez, paid the price for a controversy-free season by slipping to 4th in the rankings. Joey Barton, John Terry, Ashley Cole, Carlos Tevez, Pepe, Mario Balotelli, and Ronaldo all feature in the top 10.