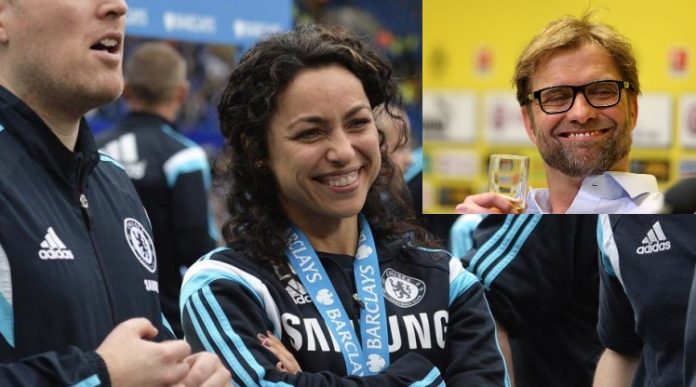 The ongoing Jurgen Klopp v Jose Mourinho popularity war is set to move up a gear, as Jurgen Klopp revealed he’s in discussions to bring Eva Carneiro to Liverpool.

The sacked Chelsea physio is thought to be keen on the move, but refused to confirm the status of negotiations: “I don’t think anyone takes a decision to move to Liverpool lightly, but I know how much this transfer would mean to Mourinho, so I’d be foolish not to consider it,” she told LFC tv.

Klopp denied the impending appointment was an attempt at “mind-games” or one-upmanship against the former Madrid manager. “This has nothing to do with ‘the Special One’,” he said smiling. “The internet loves me and it loves Eva. Together, we can make Liverpool the “new Arsenal” of the internet. We’re never going to lose another online opinion poll again.”

Carneiro admitted an element of “re-training” may be required to meet the demands set by her new boss. “During a game, Jurgen would prefer that I don’t injure our players further, in an attempt to waste time. This is going to be a lot different to Chelsea.”

The 41-year-old continued her accidental condemnation of Mourinho’s methods, by insisting her job description at Chelsea was “time wasting” and that massaging was the most difficult aspect: “The only thing worse than massaging Terry’s ‘third leg’ before a game, was massaging Mourinho’s ego after one.”

She continued, revealing more secrets from the Stanford Bridge dressing room. “Jose cannot stand when someone is more famous than him at the club,” she said. “That’s why he got rid of Lampard and Drogba. He’s not bothered about Terry though. No one wants that type of fame.”

Carneiro says “3 memories” stick out in her mind from her time at Chelsea, which she labels “the good, the bad and the ugly”. “The first, was when we won the Champions League. The bad memory was obviously the incident at Swansea.” And when asked what the third was, she shrugged, replying, “Diego Costa”.