Home FOOTBALL NEWS Falcao: “I can be Chelsea’s biggest flop yet” 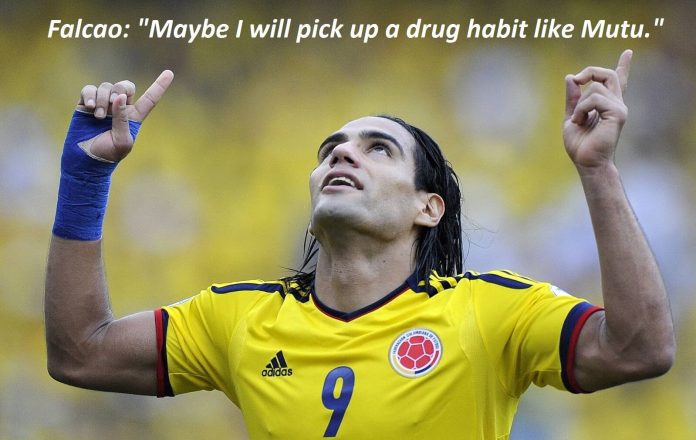 Chelsea have rolled out the red carpet for former Man Utd “goalscorer”, Radamel Falcao’s press conference, after the forward agreed a one year loan deal from Monaco.

Even Roman Abramovich was moved to speak to the media of his joy at securing Falcao:  “I really believe that Radamel is the next in a long line of expensive forwards that ruin their careers at Chelsea. He scored as many goals as Chris Smalling last season. We actually think he could be worse than Kezman.”

Falcao acknowledged the difficulty of stepping into the same boots as Torres, Kezman and Shevchenko, but appeared relaxed about his future:

“I could have joined City and become a success like Tevez or Aguero. But I think in this moment, I prefer to sit on bench and earn £250,000 a week. Maybe I will pick up a drug habit like Mutu. Maybe Mourinho will somehow send me out on loan. Many avenues are open to me.”

Falcao’s career has followed a similar path to former United and Chelsea star Juan Seba Veron, and Falcao was quick to pay homage to his fellow South American: “Juan Seba is the holy grail of terrible signings. Every South American who dreams of one day playing in the Premier League, is in awe of what he accomplished. Not just at Manchester United, but even worse at Chelsea. He made Djemba Djemba look like Zidane.”

Veron has since retired and currently works in London. He does not regret his time in England and says his time there was a great learning curve for his current role. “I’m working part time in Madame Tussauds as a stand in for the Ali G statue which is being cleaned.” he said, waxing his head. “Standing around was pretty much all I did in the Premier League so this role was a natural fit for me.”

Mourinho confirmed his intention to immediately loan out Falcao, along with 78 others: “We will probably loan him to Bolton or something. My transfer strategy is much like the first time you play a new version of Football Manager; buy and loan every player in sight and see what sticks. If I don’t have half the population of Iceland out on loan, then I’m not doing my job.”

The Chelsea boss seemed irritated by Falcao questioning the move to Bolton Wanderers and his insistence on referring to Mourinho, as ‘The Special One”:

“I think it is HE, who is ‘the special one’… You know… Special in the head… He’s not very smart is what I’m trying to get at” he said.  “What do you (media) want from me? My agent is JORGE MENDES. You figure it out.” he shouted, before storming out.

Who do you think was the best Chelsea striker? Shevchenko, Mutu, Torres, Ba? Can Falcao surpass them all? Let us know on Facebook and Twitter

Posted by Fail Much Football News on Monday, 15 June 2015