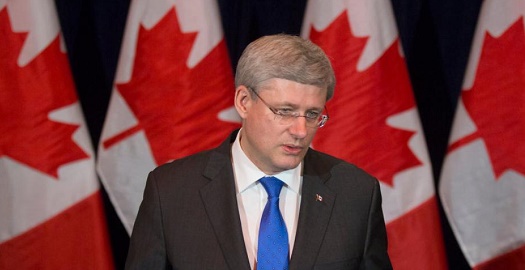 Canadian Prime Minister, Stephen Harper, has warned citizens that polling stations across Canada could be targeted for a potential terrorist attack.

The Conservative leader warned of “increased chatter” leading up to Monday, October 19th and suggested that young people in particular, were the most likely to be targeted.

“Our intelligence suggests that Canadian polling stations could and will be targeted by terrorists,” Harper said at a rally in Toronto. “We would like to ask all citizens to avoid any area where voting may be taking place and to please stay at home until after the threat has disappeared, expected to be Tuesday at the earliest.”

Harper added that polling stations in major metropolitan cities are at greatest risk, while stations in rural areas are not expected to be targeted according to the Conservative leader.

The Canadian Security Intelligence Service (CSIS) have posted a “Terror Alert” map highlighting areas believed to be at risk. “People living in the safe zones, which we have highlighted in blue, are not under threat and should therefore go about their business as usual,” the Prime Minister said. “We encourage people in these regions to not feel alarmed and to continue to vote, worship Jesus Christ and wear traditional forms of headgear.”

He added that those in the red-shaded areas were at greatest risk with those in orange areas “not much safer”.

Unlike in the US, the CSIS does not normally publicize a change in the terror alert, but has made an exception due to pressure from the government. Justin Trudeau immediately branded the alert as “fear mongering”, a claim Harper denies: “I think that’s Justin’s inexperience showing. My only concern is the safety of all first-class citizens of Canada. There are some people in this country who are trying to take away our rights, and tell us what we can and can’t do. Not on my watch.”

Help the BSJ make news great again by following us on Facebook and Twitter, or supporting us on our Patreon!