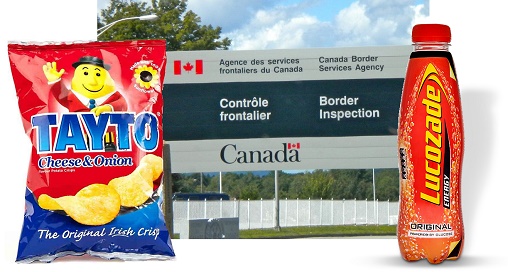 The Canadian food safety authority, Health Canada, have declared that staple Irish products; Tayto crisps, Lucozade and McDonald’s curry sauce, are “not fit for human consumption”. The organisation has labelled the beloved Irish food as a serious risk to human health, and distribution will be treated with the same penalties as a class A drug.

The shocking announcement comes after a large care package from Ireland, destined for Canada, had been seized by the Canadian Border Services Agency. The package was en route to an unnamed Irish man living in Toronto who had recently fallen into a coma due to “severe malnutrition”. According to his mother, the man was a recent immigrant to Canada, on a working holiday visa, but had struggled to adjust to “non-Irish” cuisine. It is believed that he had not eaten in over two weeks after his initial supply of Irish food ran out.

His mother had pleaded with the Canadian Border Agency to allow his son access to the vital products. “I don’t think he’ll survive much longer without them,” she said. “He was having an awful hard time in Canada. He said he hadn’t had a decent sandwich in a month and that the Canadians hadn’t a clue what a snackbox was. He was giving out about fish wrapped in seaweed or some god awful rubbish like that.”

However, much to the dismay of the man’s family, the package was destroyed by the Canadian authorities. The man remains in a critical condition.

Described by the Globe and Mail as “Crystal Meth for Irish people”, Irish doctors regularly use Lucozade to treat a range of illnesses from the common cold to HIV, a “remedy” which has baffled their Canadian counterparts. Dr. Eoin Deffley, a doctor based in Toronto, told FM News that the warning signs were there, for all to see: “Lucozade has twice the acidity levels of hydrochloric acid and has been linked with a dramatic lowering of IQ levels for those who consume it regularly. And worst of all, it exhibits no particular flavour whatsoever. We’re quite frankly, baffled anyone could drink this. And don’t even get me started on those potato chips.”

Reports suggest that Health Canada were advised by their American counterparts of trace elements of the chemical Hydrochrestilsulphide being found in both Lucozade and Tayto. The Canadian authority immediately banned the substances, saying in a statement: “It’s not a good sign if a food product is being banned in The United States. Those guys will literally eat anything.”

It remains unclear however, if the US health authority banned Tayto and Lucozade due to the potential health risks to consumers, or because hydrochrestilsulphide is a key component of many nuclear devices. Last year, a US based terrorist group were said to have used 300 bags of Tayto crisps and 400 bottles of Lucozade Alert in an attempt to create a nuclear weapon in Philadelphia. The device was picked up by the FBI who claimed the Tayto/Lucozade bomb could have “levelled 20 square blocks”. The FBI refused to confirm if the substances were destroyed or consumed.

Both Canada and the US have put in place extremely strict regulations. Keith Beedie of the Canadian Security Intelligence Service stated that possession of these dangerous chemical substances in any quantity could result in a minimum 25 year prison sentence, and thereafter deportation and banishment from Canada. In the US, those found guilty of distributing Tayto and Lucozade in large amounts would be placed on the ‘FBI most wanted list’, but could also face a maximum sentence of the death penalty.