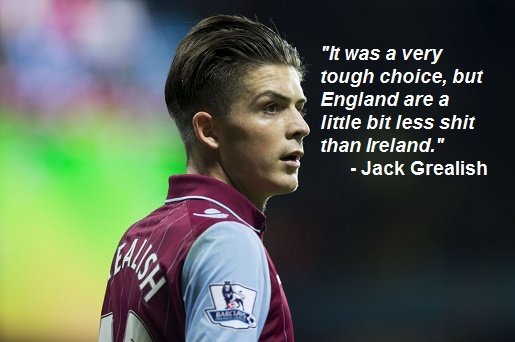 With Jack Grealish’s international future now decided, the Aston Villa midfielder used his newly-found free time, to sit down with England legend Gary Lineker, for an exclusive interview. The conversation on the entire English/Irish tug-of-war, will be broadcast on BT Sports as part of Lineker’s endless series of football interviews.

Grealish told Lineker that his international future had been the most difficult decision he has ever made. “It was the hardest thing I’ve ever had to do,” said the visibly nervous 20-year-old. “It was a very tough choice, but England are a little bit less shit than Ireland.”

The Rep of Ireland U21 continued his brutally honest assessment of both nations, by suggesting he would have preferred the “more fashionable” Welsh side.

“At the end of the day, England are the lesser of two evils really,” he said. “Sure I could carry the team like Bale, but that’s a lot of effort for no reward. Anyway, look at all the shit James McCarthy is getting from the Irish fans. I couldn’t be arsed with all that.”

Grealish denied that his agent, Jonathan Barnett, had pressured him into the decision for financial incentives: “No, that’s not true. Money never factored into my decision,” Grealish said. “The only thing I thought about was how shit the Irish team are. I thought about McShane and Whelan and Keogh, and knew I was making the right decision. I’d like to reassure all Irish fans, that the extra millions that I will make from playing for England, will provide only a small amount of comfort to me.”

The FAI used the announcement of their new sponsorship deal with Mastercard, to tweet a thinly-veiled attack on the English FA and Grealish’s agent: “There are some things money can’t buy. An international footballer, is not one of them.”

The England boss, Roy Hodgson, appeared pleased to have the promising youngster available for selection: “I think Jack has a bright future ahead of him, now that he’s declared for England. I see no reason why he can’t lead the national team all the way to the quarter finals of Euro 2016, before getting sent off and inevitably becoming vilified in England for years after.”

Martin O’Neill epitomizes a nation with his only statement: “We never wanted him anyway.”

£71m move to Manchester City FC? Scores in Euro 2016 for England? Links up with Martin O’Neill back at Aston Villa? This is the next 10 years… for Jack Grealish.