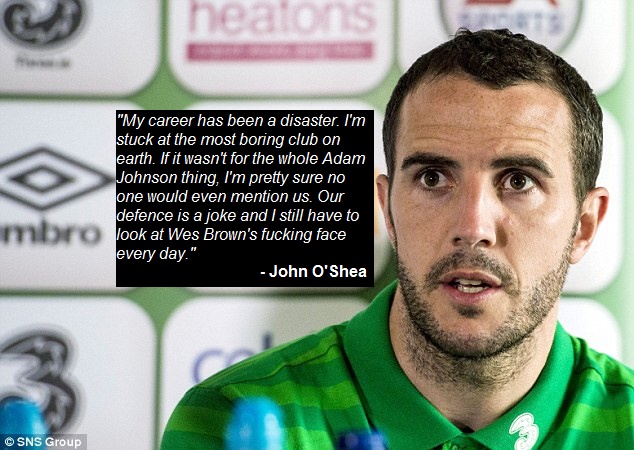 The poster child for the modern day utility player, John O’Shea, became overcome with emotion while warning young players of being too flexible as a footballer.

The Sunderland captain’s speech, to a group of Sunderland Under-12 players, quickly descended into a 2 hour rant about his career, with O’Shea saying the f-word 174 times. “All my career, the nicest thing anyone’s ever said about me is that I’m versatile.” he said to the assembled youth players. “I’m fucking sick of it to be honest, lads. You know, I was actually considered a technically gifted player when I was a kid at United? But like all Irish people, I’m too nice and agreeable and played wherever Fergie asked me. That prick ruined my career.”

The Rep.of Ireland defender continued his explicative-filled rant as the children sat silently. “Now I’m stuck at the most boring club on earth. If it wasn’t for the whole Adam Johnson thing, I’m pretty sure no one would even mention us. Our defence is a joke and I still have to look at Wes Brown’s fucking face every day. My career has been a disaster.”

What began as a Q&A session with Sunderland youngsters, soon gave way to an impromptu therapy session for the Ireland captain.

“Hey, you’ve had a great career,” said Laura, 10. “You’ve won the Champions League and you’re the captain of Ireland.”

O’Shea quickly dismissed the young boy’s attempt at reassurance. “Well he’s hardly known for his fucking tackling, is he?” he screamed.

“Ah anyone could fucking do that,” O’Shea said dismissively. “Sure Paul McShane has 31 caps. Are you trying to say I’m worth 3 Paul McShanes? You little shit.”

Finally one child asked O’Shea: “When is it time to leave? I really have—”

“Good question,” he said. “I’m wondering that myself. Not long hopefully. Pretty sure we’ll get relegated this season and then who knows. I seem like the type of player destined for the MLS. Robbie looks like fucking Ronaldo over there. Can’t be that hard.”