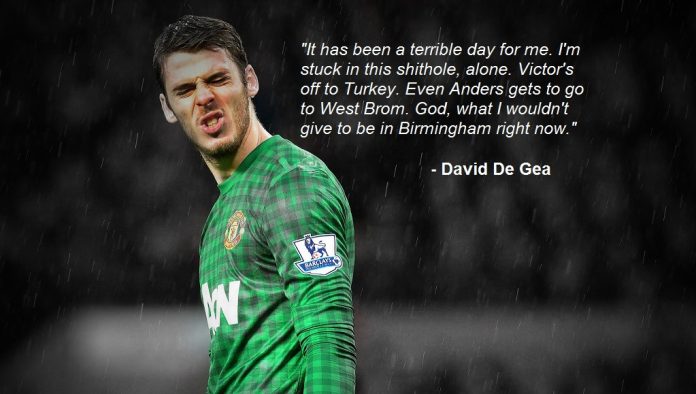 As the dust settles on another extraordinary day in the transfer window, David De Gea remains a Man United player with Navas, staying at the Bernabeu. Both clubs are claiming the other is responsible for the breakdown. Reports emerging from Old Trafford, immediately after the Spanish transfer deadline, suggested that Madrid had been unable to open the pdf document as they had recently upgraded to Windows 10.

The Spanish champions in turn blamed United for not sending the document on time. However, Ed Woodward hit back and claimed Real Madrid were trying to delay their move for Keylor Navas, United’s number 1 transfer target. He dismissed Madrid’s claims and advised Perez to check his spam folder. The email was recovered but it was deemed too late by the Spanish authorities. Florentino Perez said Woodward was correct, but still blamed United:

“It is the Manchester club’s fault, Every day they email us: ‘Can we have Bale? Can we have Ramos, Can we have Ronaldo back?’ We have received so many proposals from Man United this summer, that our email labelled their enquires as spam months ago. We have set up a new email address specifically for poaching… excuse me purchasing Man United players in future.”

The Guardian has reported that De Gea is distraught at the news and quote him as saying: “I’m very upset with all parties to be honest. Real Madrid, Manchester United and especially Windows 10.”

In reaction to the development, Man United have launched a bid to resign Anders Lindegaard, whom they sold to WBA 11 hours ago. Meanwhile, David De Gea has been left to wonder what might have been: “It has been a terrible day for me. I’m stuck in this shithole, alone. Victor’s off to Turkey. Even Anders got to go to West Brom. God, what I wouldn’t give to be moving to Birmingham right now.”

Many reputable media outlets including the Sun and Daily Mail have questioned why the transfer was left to the last minute. Real Madrid claim United held up the deal, by repeatedly inserting Gareth Bale’s name in place of Navas into the transfer agreement.

A follow up email, sent by Woodward to Madrid has been leaked to the press. It reads:

“Sorry about the mix up. Is the deal still good for January? Willing to accept same price OBO. While I have you, what’s Luka Modric up to these days? – Cheers, Ed.”