Home NEWS NFL vs Soccer: How to make soccer more like the NFL –... 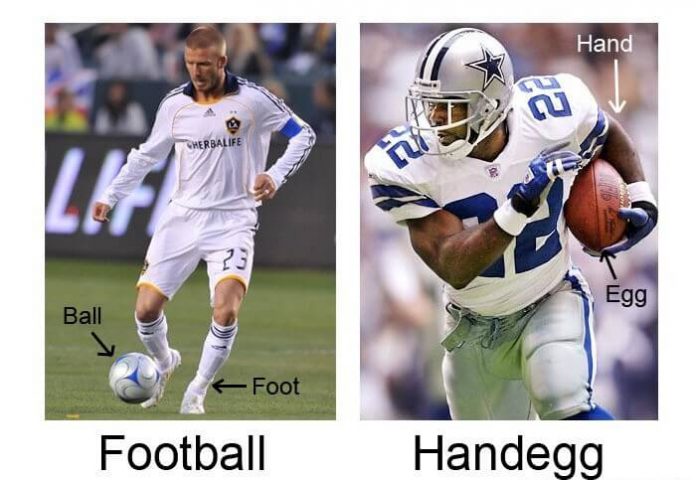 Right off, let me say that I love Europe. England, Ireland, the other places, they’re great. I even like English cooking. One time I went to an English pub and wanted to have some authentic  English food, so I ordered some “Johnny on the Swivel” and some “Jellied Jinks McGee” and told the garcon I’d finish off with some “Dustbin Pudding” for dessert. He looked at me like he didn’t know what I was talking about, so I figured that he wasn’t that familiar with the traditional English menu. He said “How about I bring you a burger?” Well let me tell you that burger was one of the best I’ve ever had, so I guess you could say that I love English cooking. And probably Irish cooking too.

Now about American football.  I notice that players in the NFL are encouraged to hold the ball, while that is discouraged in the game of soccer. It seems like you could score a bit more if the players could pick up the ball from time to time. I don’t mean all the time, of course, as that would be a different game, but maybe at various five minute intervals, or if a player does something particularly good on the last play, or something like that.  The official could blow his whistle and put his hands in the air to signal when this could happen. The reason I say this is that there seems to be so little scoring in soccer as opposed to American football. A game in the NFL could easily end with a score of 28-24 or something like that, and that’s when the teams aren’t even cheating.  In soccer, you’re lucky if you see three goals the whole game – 3-1, 2-0, 2-1. I think one game I saw ended with negative numbers.  Don’t ask me how that even happened. It might make things a little more exciting if there was more scoring. That’s just my two nickels worth.

It seems like both games are quite popular. Here it isn’t football season now so the local TV stations only devote about three hours a week talking about the local NFL team, instead of the usual ten or twelve hours  during the regular season.  Some of the players even end up on the news for other reasons, although many are eventually acquitted.  They also wear lots of padding and helmets and plastic protectors, while soccer players wear much less. That may be because American players get hit in the head a lot more, which may explain why they end up on the news so much.   I guess you’d have to be a psychologist to figure that one out.

One final big difference I see is that there’s plenty of women playing soccer – in school, in the Olympics, really all over the place, but very few women playing American football. That could be because with all the padding and the helmets it seems that every player looks like all the others, and most women I know are very concerned about how they look. The extreme uniforms would probably take all the fun out of it.  Plus, women don’t like getting tackled and injured that much.  That’s why they don’t like The Three Stooges.  Especially the one where the Stooges played football.  Boy, that one makes you think!

Burrard Street Football - Thursday, July 21, 2016 0
MATCH of the Day presenter, Gary Lineker, has sensationally vowed to shoot a pornagraphic video live in the MOTD studio, if Leicester City win the...