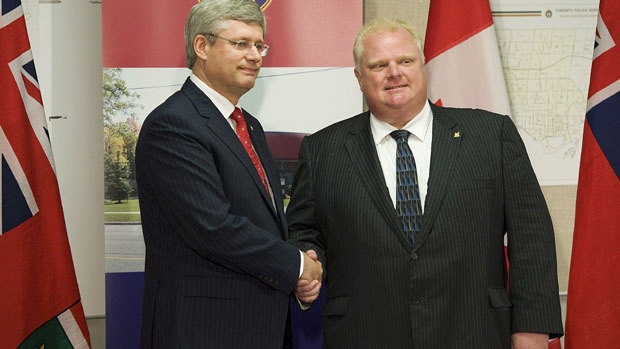 As the dust settles on an exhausting 78-day long campaign, Conservative attention immediately switched to finding a replacement for the beloved Stephen Harper.

Media reports thus far suggested Doug Ford, Brad Wall and even Christy Clark as the early frontrunners for the position. However late Tuesday night, Doug’s occasionally controversial brother Rob, mentioned himself as a possible replacement. Speaking from his campaign headquarters above Club Zanzibar’s in Toronto, Ford said that the “biased Liberal media” had cost the conservatives the election and his own position as mayor.

“I will be a PM of the people,” he said, as he shook hands and passed his phone number to patrons and passersby. “This country needs a Prime Minister on the same level as Donald Trump, and I think I’ve already proven myself to be the perfect person.”

Ford brushed away suggestions that he had broken the public’s trust one too many times: “Listen if I had a dollar for every time I was caught smoking crack, smoking weed or hanging out with prostitutes then I’d be a slightly richer man. I admit I’ve made mistakes but I swear this time, is the last time.”

The 46-year-old claimed his immediate concern will be changing Canadians’ perceptions of him as ‘Toronto’s crack smoking mayor’ into “Canada’s crack smoking Prime Minister”.

In a desperate attempt to appeal to Liberal voters, Ford also suggested appeasing them by legalizing crack cocaine. “I’ve always had a tough no nonsense approach towards drugs. But I think in this case we can all admit to smoking a bowl every now and then.”

After pausing momentarily to speak with his advisors, Ford then immediately apologized for his previous comments and declared his “commitment” to getting himself treatment “by 2018, at the latest.”

On Facebook, Conservative campaigners were out in force. “People, there’s only 1,459 more days until the election. Every second counts,” said one. “Please reach out to your neighbours, colleagues and complete strangers on social media, and encourage them to join the Ford Nation for 2019.”

Finally, a Toronto Star reporter repeated the famous question first asked 2 years ago: “Have you smoked crack cocaine in the past two years?”

“Oh wait, I know this one,” an assured looking Ford replied. “No. I have not.”