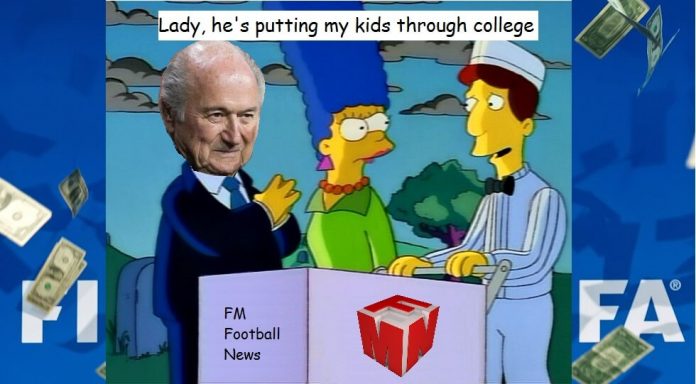 The Satire Football News Website, FM Football News, has publicly begged Sepp Blatter to reconsider his retirement from FIFA. The site also wrote to football’s governing body this week, imploring them to re-elect Blatter or they would “be forced to seek legal action against FIFA”. FM claims that by removing Blatter and appointed a competent replacement, FIFA will be in breach of European Union competition law which states that corporations cannot “create cartels and monopolies”. The website claims that Blatter is key in helping them compete with other larger satire sites. “Waterford Whispers has Denis O’Brien, The Onion has Donald Trump and we have Sepp Blatter.”

CEO, Gus Fring, defended the company’s position on Blatter insisting that the FIFA president was a necessary evil:

“People don’t want FIFA run fairly. They want controversy, they want corruption, they want homophobia, they want racism, they want workers dying building stadiums in impoverished nations and most importantly they want sexism. This is what we expect. FIFA trying to be more than that is, akin to a satire website writing a story about itself, highly egotistical.”

Described by IKEA Canada as “some website called failmuch.com”, FM Football News was the brain child of Herb Dean, the UFC referee. Using his notable football connections, he quickly assembled a dream team of the finest and funniest minds in soccer, including Joe Kinnear, Carsten Jancker, Hidetoshi Nakata, Dwight Yorke and Cláudio Taffarel. Dean sold the company to an Irishman in 2015 who transformed the website into “Norway’s 6th most visited satire football news website, based in Canada.” – Norway Post.

However news of Blatter’s retirement, hit everyone at the company hard. Fring said it could have serious ramifications for his family: “If I have to tell my wife, that we have to put another kid up for adoption, she’ll be pretty pissed.”

Head writer, Hidetoshi Nakata outlined the bleak future facing FailMuch. “If Blatter goes, that’s 90% of our material out the window,” a dejected looking Nakata said. “Of the nearly 6,000 articles we have written, 5,500 have been about Blatter, 211 have been about Ched Evans, 147 on Emile Heskey and almost 3 have been funny.”

Majority shareholder, John Egan said he does not regret investing his life savings in the company and remains confident the site will help him “realise my dreams”.

“I’m just a simple man from Leitrim,” Egan said. “I don’t need fancy cars or tons of money. All I want is for Leitrim to grow and prosper, unite under my leadership, break away from Ireland and form its own sovereign state, invade Roscommon enslaving all who oppose us, before quickly capturing the rest of Ireland and ‘cleansing’ the Irish race of all non-Leitrimites… That, or Leitrim to win the All-Ireland. Anything more is just being greedy.”