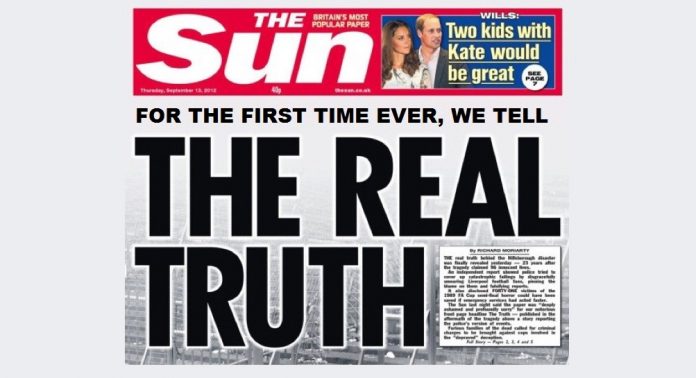 A statement released by the media group on behalf of The Sun and its sister outlets said: “We have made the very difficult decision to move in a new direction. With so much competition from other sources, The Sun feels it no longer has a duty to its readers and the people of Britain, to fabricate the news.”

Reporting factual news is seen as a huge departure for the paper and News Corp. itself. Media commentators say the Fox News-owned group is trying to “clean up its act” after years of scandals, from Page 3 to the News of the World. The Sun’s editor-in-chief, Tony Gallagher, dismissed those claims, saying there were a number of “contributing factors” involved in the landmark decision.

As with most newspapers, online media has dramatically impacted The Sun’s readership numbers and Gallagher cites this as one reason for the switch. “With the internet, the general public are far more well informed nowadays, which obviously hampers us quite significantly.”

The internet has also provided a vast increase in competition, with the fabricated news industry growing exponentially in the past 5 years. “With so many bullshit news stories nowadays, competition is just too fierce in the mainstream news. That’s why we feel it makes more sense to move into a more niche market, like factual news.”

However, Gallagher claims the prime factor for the move, comes down to the increasing difficulties involved in inventing news, with the endless supply of unbelievable, yet factual news stories, readily available online these days. “With people like Trump, Palin and our own Katie Hopkins, it’s become near impossible to make up something more outrageous than what they come up with.”

The final issue under the current format will be printed on March 31st, giving staff over 2 months to prepare for the changeover. “For the majority of these writers, this is an entirely new concept, so I think some period of adjustment is to be expected,” explained one senior News Corp. executive.

Prime Minister David Cameron spoke of his “great sadness” at the shock announcement. “Today marks yet another sad day for print journalism in Britain,” he told the House of Commons, as some ministers openly wept. “First the News of the World, then Nuts and FHM, and now this. They may be gone, but they all leave behind a lasting legacy.”

How over 2 million Britons will react to reading factual news stories for the first time, remains to be seen, but Gallagher hopes readers will stay loyal, and claims “there’s a lot more” to come from the newspaper. “Just because we’re now burdened with having to actually report the news, doesn’t mean we can’t exaggerate, misrepresent or manipulate that news,” he said, in front of a relieved-looking writer’s room. “Our readers can still expect the same bias and ill-informed news coverage Britain has to offer, with added boobs.”

Gallagher also labelled internet rumours that claimed Page 3 model’s breasts will now have to be real, as “absurd”. “We still have a business to run,” he said.