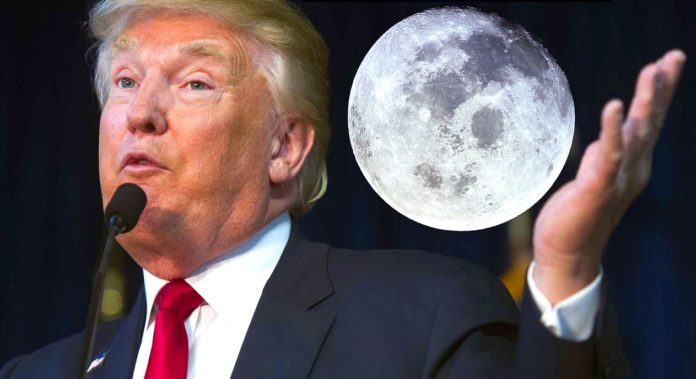 HOUSTON, TX—In a shocking revelation, Donald Trump has vowed to become the first world leader in history to visit the Moon, after becoming inspired by the film Independence Day.

Speaking at his inaugural address Trump promised to “unlock the mysteries of space”, expressing an interest in putting man back on the moon by 2020.

Now he has gone one better by vowing to personally spearhead the next mission, during his term as President. “I will become the first president ever to walk on the moon,” he announced to rapturous applause at NASA HQ. “It will be one small step for Trump, one giant hand-print for Trumpkind,” he continued, adding that once his hands touched the lunar surface, the imprints would “no doubt” be seen from Earth.

The American leader made the announcement during a joint press conference with NASA where he unveiled his remarkable plan, while confirming a 150% reduction to the space agency’s climate change program.

Despite ordinarily requiring years of advanced training, Trump claims he’s already “more than ready” both mentally and physically and will therefore refuse all training, something NASA seems untroubled by. “Just so long as we get him on that rocket, who cares?” one insider told the BSJ. “We’re sure he’ll figure it out.”

Trump freely admits to being a “little rusty” on human spaceflight, but maintains he’s seen every episode of Cosmos, and will insist upon “the experienced Lance Armstrong” coming out of retirement to join him “for one last mission”. “Together Louis and I will make the moon great again.”

The commander-in-chief also revealed his surprise that his idea proved to be so popular with his advisors, family and critics, alike:

“Literally everyone and I mean everyone, thinks this is the best idea I’ve ever had,” he enthused. “Even the people who generally hate me think I should go. Right now, if I could.”

“Steve, Kellyanne, Jarod, Ivanka, they all think it’d be great… I honestly don’t remember Mike being this enthusiastic about anything ever… And Melania literally burst into tears of pure happiness when I told her. She just kept hugging me saying ‘thank you, thank you’ and asking me when I was leaving.”

Although the First Lady’s joy appeared to have been short-lived. “She didn’t seem quite as enthusiastic once I told her she’d be coming too,” he added.