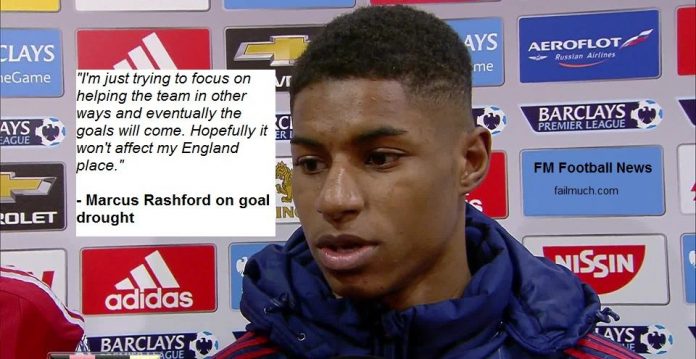 UNDER pressure Manchester United forward Marcus Rashford, has told FM Football News that he is ” very concerned” about his recent goal drought and has vowed to turn his career around.

Rashford has now failed to score in over 140 mins of Premier League football and indeed during his entire 270 mins as a professional footballer, he has only managed to score in 4 of those minutes.

At one point in his career, the self confessed “die-hard United fan” appeared to have the world at his feet having scored twice against Arsenal and FC Midtjylland, but he has since been brought crashing back down to reality, after failing to score against Watford. As the final whistle blew on United’s 1-0 win, while there were cheers for the United team, loud cries of “you’re just a shit Federico Macheda” were directed at Rashford from the Stretford End, as he left the pitch.

“The fans were right to boo, my performance was not good enough,” he told reporters. “I’m trying to not let the drought get to me and just trying to focus on helping the team in other ways and eventually the goals will come. I just hope this little spell doesn’t affect my England place.”

Including non-matchdays, Rashford is without a goal in over 5 days in the league and nearly 8 days in Europe, a statistic the veteran 18-year-old is well aware of.

“People say it’s the longest scoring drought in Premier League history,” he said disappointingly. “I know my record hasn’t been good enough lately but I still think I can improve. I’ve just turned 18, I’m still at least a year or 2 from my peak. I just hope the fans haven’t given up on me.”

Having suffered the embarrassment of not scoring in 45 minutes of football against Watford, Rashford was moved out to the right-wing for the second half. Given the Mancunian’s current scoring run, it’s a position he feels he could develop into: “Yeah it’s a possibility, I’m obviously not much of a finisher so maybe I could play out wide, or right back, or even centre back. I’m willing to reinvent myself to save my career, like my idol, Alan Smith.”

When Rashford first burst onto the scene last Thursday, scoring twice on his senior debut, the forward appeared to have it all. He followed that up with another brace against Arsenal that led to many to claim he could be the next big England star. Following that win, Louis Van Gaal warned the young striker against the trappings of fame. “He must keep his feet on the ground and not get swept up by all the publicity,” Van Gaal said. “Yes of course if he continues to score goals like this, he will become the greatest player to ever play the game, but he must not get carried away.”

However, last Sunday feels like a lifetime ago. Given the 18-year-old’s current disappointing run in front of goal, Van Gaal admits he may look to bring in some players from the youth setup. “I may rest Marcus for a few games and give some young players a chance for once. Nicky Butt tells me we have a number of options in our Under-14 squad to choose from.”

The Man Utd manager admits he will “wait until the summer” before making a decision on Rashford’s future, but widespread speculation suggests the no. 39 will leave Old Trafford, possibly for the MLS. Van Gaal says it would be a “sad end” to a career that began so brightly. “I remember how promising he looked in the beginning,” Van Gaal said. “He had a great eye for goal back then, but that was 7 days ago, and now Marcus’ career is in real danger of stalling permanently.”

Roy Hodgson appeared equally as frustrated with the former goalscorer, as he watched on from the stands. The England manager later admitted that Rashford was now “unlikely” to make the squad for Euro 2016 unless he can “somehow rediscover his scoring touch”. “Four goals in three games is not the type of form we expect from an England international,” Hodgson said.

Do you think Marcus Rashford should be given more time to rediscover his goalscoring touch? Will his drought affect his England chances? Let us know on Facebook, or just scream really loudly until someone answers you.