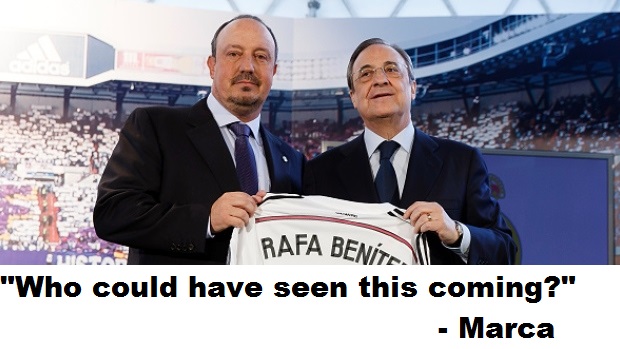 “Who could have seen this coming?” was the question on all football fans’ lips as the news of Rafa Benitez’s sacking by Real Madrid, spread like wildfire across social media on Monday evening.

An official announcement from the club read: “Today Real Madrid took the regrettable decision to relieve Rafa Benitez of his duties. The club does not take decisions like this lightly but feels the time is right to move in a new direction. The club would like to place on record our thanks for the work Rafa has done here. He will always be welcomed here with open arms and will occupy a special place in the hearts and minds of all our followers.”

A bewildered Benitez addressed supporters following the announcement, as many fans wept openly. “I’m stunned, to be honest,” he told them. “I mean if you can’t have job security at Real Madrid, then where can you?” Outside the Bernabeu, supporters laid wreaths and lit candles for their fallen hero. Others, demanded Florentino Perez’s resignation and urged Benitez to consider running for the presidency at some point in the near future.

Marca, amongst others, had pleaded with the top brass at Real for patience, suggesting Benitez was “building a club” and that he should be afforded more time following rumours that Madrid were preparing to wield the axe.

However, ultimately the former Liverpool boss paid the price for a disastrous season, that has seen his side top their Champions League, managing to only win 5 of their 6 group games, their failure personified by the disastrous 10-0 win over Malmö in Benitez’s last Champions League game for the club. Madrid’s league form has been equally as unimpressive, with the club lying an unforgivable 4 points behind the leaders Atletico.

Zinedine Zidane has been confirmed as the replacement for the Spaniard, having cut his teeth with Madrid’s B team. The Frenchman claims his time with Madrid’s youngsters means he already has some great ideas on how to take the club forward. “Real needs to move away for the club’s renowned philosophy for developing young talent, and instead focus on attracting star names, no matter how difficult that may be,” he told Marca. He also acknowledge the difficulty of the job ahead with the unenviable task of attempting to overhaul Atletico’s seemingly insurmountable lead with a team of unproven players such as Ronaldo, Bale and Benzema.

Cristiano Ronaldo took to Twitter to express his sadness at the news and to thank Benitez personally. “Rafa is by far the best manager I have ever worked with. Though our time together was short, I have learnt so much from him, not only as a footballer but more importantly, as a man.”