Home NEWS ENTERTAINMENT Al Pacino’s All time Favourite Movie has been revealed, and the answer... 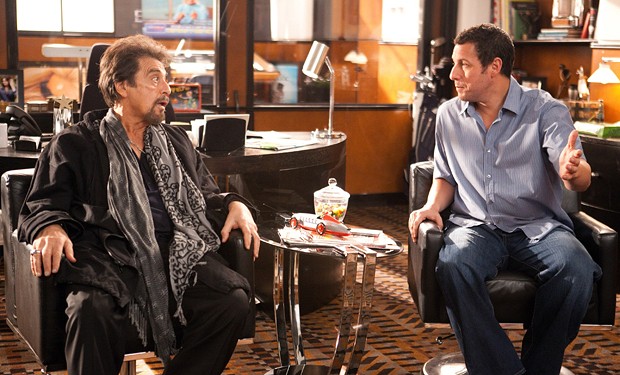 Hollywood icon Al Pacino has starred in some of the most memorable movies of all time, including Scarface, the Godfather and Heat. Recently he was asked by Access Hollywood to name his favourite movie of all time. He did pick one of his own movies but Al Pacino’s all time favourite movie still caused quite a surprise!

“Jack and Jill was the one that really changed everything,” Pacino said. “It was the type of film I always wanted to make. I had always been typecast into these complex, mysterious and challenging roles. Adam really took a chance on me and gave me the belief and self-confidence to, not only play myself in a movie, but also be attracted to Adam Sandler in a dress.”

Pacino claims the role changed his life and led to the actor finally realizing a “long-held dream”. “My entire career, all I’ve ever wanted was to break into the gross-out comedy genre but no one was willing to give me a break. Since Adam offered me the role in Jack and Jill, my career has literally not been the same.”

During the interview, Pacino slammed critics of the movie and of Pacino’s role in the movie, saying, “I think I really changed people’s perception of me. Jack and Jill has made a huge impact on my legacy.”

When asked about the film’s disastrous box-office numbers, Pacino claimed the audience did not understand the complex relationship between the two characters. “Adam and I, or Jill as I still call him, had great chemistry together. Real raw, animalistic, sexual chemistry. None of that Michelle Pfeiffer bullshit.”

Apparently the Academy Award winner’s only regret is not having worked with Sandler sooner. “If only it had been Adam in Heat, instead of Bob,” he said, “we would have swept the Oscars that year.”

Up next for Pacino, will be the lead role in the latest in the prestigious “Van Wilder” franchise,’ Van Wilder: Old folks home’. “It’s set in a senior’s home and follows the love story between Van Wilder’s dad and a beautiful 100-year-old woman,” he said. “I play both the grandfather and his love interest. The Sandman thinks I’m ready.”

Do you agree with Al? Do you think Jack and Jill is Pacino’s best work? What is your favourite Al Pacino role? Tell the world on facebook here….