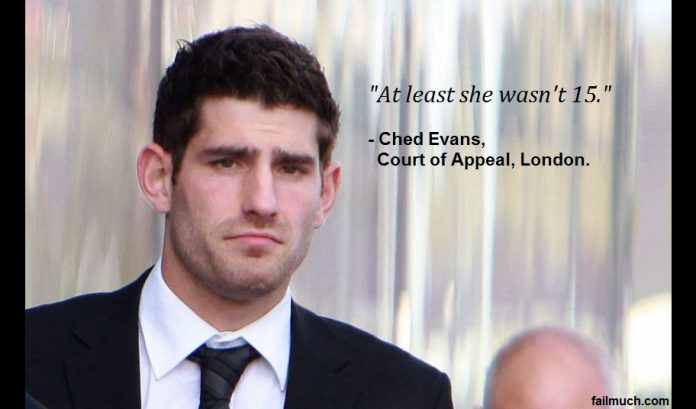 CONVICTED rapist Ched Evans has made an impassioned plea to the court of appeal in London, where the ex-footballer defended his actions by claiming they were “not as bad as some others.” Throughout the 45 minute speech, Evans’ cited Adam Johnson’s case 37 times, labelling it the “primary reason” why he should be exonerated.

“At least she was the legal age,” Evans said exasperatedly. “That’s gotta count for something, hasn’t it?” Sentenced in 2012, the former Sheffield United forward served half of his 5-year sentence for rape. Last week Adam Johnson was sentenced to 6 years for having sexual contact with a 15-year-old.

Continuing to distance himself from former Sunderland winger, Evans insisted he is “disgusted” by Johnson’s actions. “I can’t speak for others,” he told the judges, “but for me, a girl needs to be over the age of consent, even if she doesn’t give it. It’s common decency.”

Speaking outside court, Evans’ girlfriend Stacey Massey claimed she feels “ashamed for” the mother of Johnson’s child, Stacey Flounders. “Honestly, I don’t know what I would do if my boyfriend has sex with an underage girl. Thank God at least with my Ched, I always knew he was cheating on me legally, which is the most important thing.”

Massey insisted that many other WAGs are also embarrassed for Ms. Flounders. “Where’s her self-respect? How could she stay with him after he went and did something like that? He didn’t even do an apology video with her. Such a lack of class, innit?”

For Evans, the 27-year-old will soon find out if his reputation as a mediocre footballer will be restored and ultimately whether or not he can continue to unfulfill his once promising potential.