- See more -
Home FOOTBALL NEWS Chelsea to rescue 1,000 Syrian refugees, and immediately “rehome” them to other... 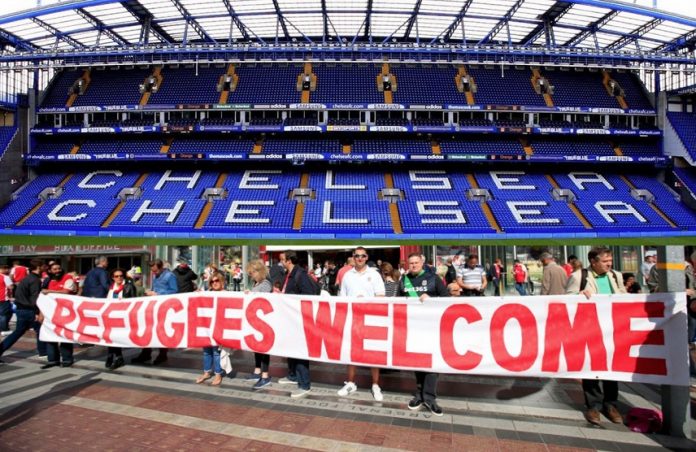 Following in the footsteps of Bayern Munich and Real Madrid, Chelsea have announced plans to help aid Europe’s ongoing refugee crisis. The Premier League champions have graciously offered to rescue up to 1,000 Syrian refugees, but in order to obtain work permits, asylum seekers will be loaned out to various other clubs around the world. A high ranking Chelsea executive played down talk of people being loaned: “No one at Chelsea said loan. We said ‘rehome’. Completely different word. We’re just going to ‘rehome’ them, for a temporary period.”

Refugees taken in by the Premier League Champions will be entered into a lottery which will randomly determine where each family will be sent, with destinations varying from Monaco to Gillingham.

Chelsea CEO Ron Gourlay, said that while the lottery is by no means a perfect system, the club has the means to help many families. “Clearly in an ideal world, no one should have to go to Stoke,” he said, “but the reality is that we simply don’t have any room at Chelsea so we’re asking people to trust us. We have developed a strong tradition of plucking people out of relative obscurity, before placing them in some other equally obscure place.”

Chelsea’s controversial loan strategy will no doubt come under increased scrutiny following the announcement, but the club insists they will endeavor to be “as accommodating as possible”. A club statement said: “The vast majority of families will be rehomed in Arnhem, Holland and while the club will make every effort to house families together, in some cases this may not be possible.”

Not to be outdone, Manchester City have announced they will be able to rehome up to 40,000 refugees at the Etihad, but only on select days. “We’d like to welcome refugees to stay with us every second Saturday and the occasional Tuesday and Wednesday, until December,” said Gary Cook.

West Ham United admitted that while they would like to follow in the example set by the London rivals, they simply don’t have enough room: “We’d love to help out,” said Karen Brady. “But we can’t have people staying rent free. Anyway, we don’t really have enough room. It’s not like we have a 50,000 seater stadium hanging around gathering dust.”

Finally, Fenway Sports Group have graciously offered to rehome any refugees in Liverpool. However demand has so far been non-existent, with one Syrian national saying “If I wanted to live in a city this overrun by crime, I would have stayed in Syria.”