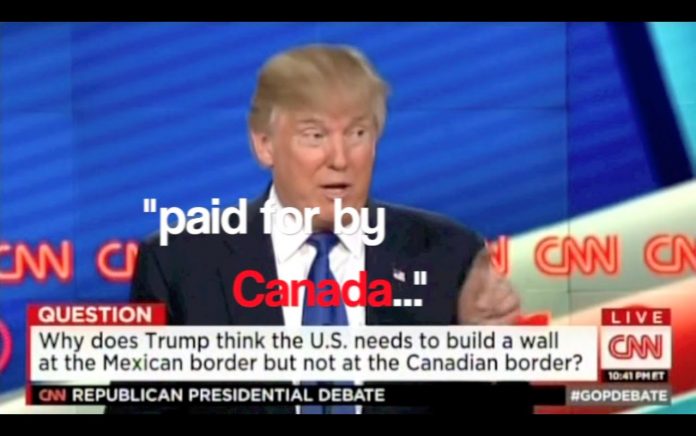 Donald Trump Jr. Tests Positive For Being A Dipshit

Donald Trump to build wall with Canada (video below)

The Republican frontrunner has officially confirmed in the “Donald Trump to build wall with Canada” video (below) that he will build a wall with Canada as well as Mexico, after previously vowing to ban all Canadians from entering the United States.

Trump’s team insist the proposed wall will be 3-times the size of the great wall of China, stretching over 17,000 miles. It will be 457 metres tall and will become the only man-made object visible from the sun. The wall will be painted with the United States flag on both sides, according to Trump, and will be known as The Great Wall of Trump – Canada.

As outlined by Trump in the below video, the wall will be paid for entirely by the Canadian taxpayer. Initial estimates place the cost at approximately US$8 trillion, 4-times Canada’s GDP. If elected, construction on the wall will begin immediately and is expected to be completed by the Summer of 2017 at the latest.

The Canadian Prime Minister is yet to respond to Trump’s announcement, but is thought to be open to the idea of separating his country from Trump.