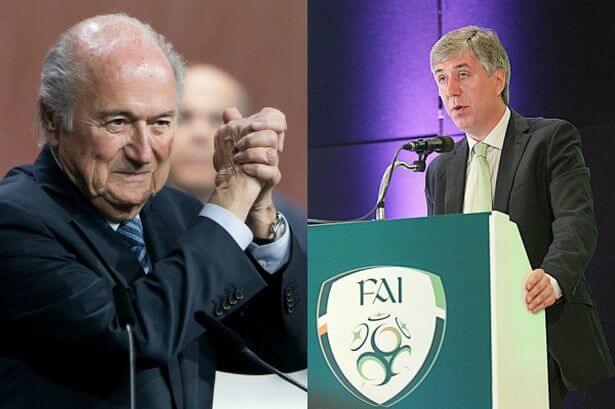 FAI chief executive, John Delaney has sensationally claimed that the Rep. of Ireland are the only country being considered to host the 2026 FIFA World Cup, after the Thierry Henry handball incident made the Irish frontrunners.

The FAI head speaking to FM Football News said of the incident:

“So I stormed into a FIFA meeting, kicked Blatter out of his chair, put my feet up on the desk and lit up a cuban. I said: ‘Listen Blatter, that 5 million didn’t quite cut it for Froggie’s handball. I want the World Cup for my people and I ain’t going nowhere until I get it. You dig?”  – John Delaney, FAI

He continued, alleging that Blatter recoiled in fear and agreed to all his demands; “He was sniffling and crying and blubbering: ‘Please don’t hurt me, Mr Delaney. I give you everything and I will never touch your wife again.’ I preceded to bitch slap him in front of the entire FIFA committee for over an hour before leaving.”

The announcement is the latest in a series of bizarre claims made by Delaney that are rarely backed with evidence. Earlier this month, he claimed that Conor McGregor looks up to him and sees Delaney as a ‘role model’: “Conor says I have the physique of a UFC fighter and says I’m the only man in the world he’s afraid of. I said to him: ‘Conor. Do not fear me. For Ireland, I fight alongside you, if not slightly ahead of you.'”

Neither Blatter, FIFA or any other football association have verified Delaney’s claims but the Irish people have taken his words on good faith. “If you can’t trust John Delaney, then who can you trust,” said one Dublin taxi driver. An online petition at change.org campaigning to change St Patricks day to St John’s day in honour of Delaney’s achievement, has gained over 125k signatures in just 3 days.

As news broke of the FAI’s triumph, flights to and from Ireland skyrocketed for the year 2026. Ryanair announced a new fleet of plane with stacked coffins replacing seats, as a low-cost alternative to travel to the finals in June.

Critics have questioned the merits of Ireland producing 20 stadiums to host a 64 team World Cup in 11 years. With this in mind, the FAI have moved quickly to seek the Brazilian FA’s help in burdening a nation with over-priced, under-utilised stadiums. Among a number of soon to be built stadiums, include Damien Duff’s new FAI team, seeking planning permission for a 60,000 seater stadium in Dromahair, Co. Leitrim. A similar stadium is also planned in neighbouring Roscommon and potentially Derry. GAA stadiums will also be used for the tournament including Croke Park but the final will take place in the soon to be revamped 120,000 seater Aviva stadium. The FAI has also confirmed that Lansdowne road will be rebuilt “for shits and giggles”..

Not to be outdone in the publicity stakes, RTE have announced a holographic Bill O’Herlihy will host RTE’s coverage of the 2026 FIFA World Cup as a “tribute to the great man, and in no way a reflection of our confidence in Darragh Maloney.”

Speaking outside RTE studios, Kenny “the eyebrows” Cunningham said he hoped to be considered as a pundit for the station’s coverage of the historic event: “Well by 2026, Johnny (Giles) will be 85 so you know there’s a good chance that, you know, he’ll be, you know,” he droned, while his eyebrows spasmed wildly. “At this particular moment in time, Dunphy can’t have long left either the way he drinks, so I’m confident I can win a seat on the panel.”