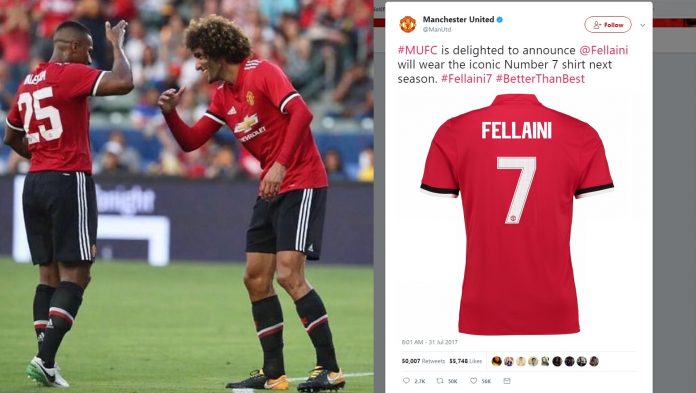 Following in the footsteps of peers such as Best, Cantona and Ronaldo, 6′4″ virtuoso said he was “proud” to accept the sacred shirt number and vowed to continue its impressive dynasty. However response to the news has been mixed.

Since making the announcement, shirt sales of the iconic shirt have actually dipped, with many customers returning any hopeful Number 7’s featuring Neymar, Bale or Ronaldo. Several posts on Red Devils forums are already calling for Mourinho’s resignation while Fellaini’s own father called the decision “a fucking disgrace”.

Historically the wearer of the illustrious #7 shirt at Old Trafford has been the heartbeat of the side, the person who dictates the style of play and Mourinho insists this is one tradition he intends on continuing:

“Marouane is critical to everything Man United is about now. The player who wears number 7 is the most important person on the pitch, and since I cannot wear it myself, instead I give to Fellaini,” he told MUTV, hinting that the United captaincy will be available next season.