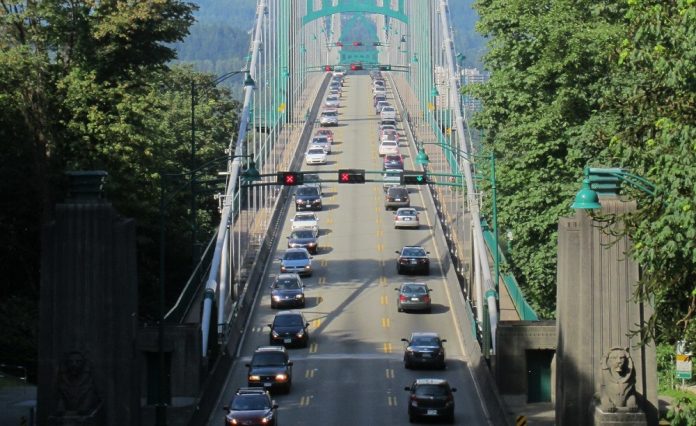 VANCOUVER—BC’s Ministry of Transportation has announced plans to close the middle lane of The Lions Gate Bridge following what they describe as “significant pressure” from the Vancouver mayor’s office. March 31st of next year will be the last day under the current 3-lane system before it is changed into a new $4 million bike lane.

The decision comes after weeks of discussions between the Ministry of Transportation, the Mayor and the COV—Cyclists Of Vancouver, whereby an agreement was reached to shut down the “inefficient” middle lane of the 3-lane Lions Gate Bridge and introduce a brand new bike lane to serve the Lower Mainland’s exploding cyclist population.

According to reports the mayor had received a number of complaints from local cyclists worried about the lack of bike-only routes in Vancouver. Similarly, complaints about the 3-lane system with frequent bridge users calling for an even number of lanes to ease traffic concerns.

“The solution was a no-brainer,” Mayor Gregor Robertson told the BSJ. “It’s a win-win for both sides, the City and Vancouver cyclists.”

Initial plans for the new state-of-the-art bike lane will see it run through the Sea to Sky Highway, with reflective glass to protect cyclists from having to look at polluting motorists.

The announcement comes as a slight surprise given a new $2 million bike lane was built only last year, but the Mayor looked to appease concerned voters:

“We don’t want people getting confused,” he said. This new bike lane will not mean the end of the old bike lane, we built last year. Instead that bike lane will serve as a supplementary or overflow bike lane, to combat the inevitable cyclist gridlock during the first few weeks of August.”

After a recent citizen’s city hall meeting with Mayor Robertson and senior city planners, the general public voiced their numerous grievances about the bridge, and in particular the 3-lane system.

As a result, Robertson released a short Facebook video declaring:

“The people of Vancouver spoke to us and we listened. They told us that they hated the middle lane, that it’s never going in the right direction and that there should be an even number of lanes in both directions. Well the city has listened and solved the problem immediately, just like the housing crisis.”

Robertson was unmoved when questioned why the Ministry of Transportation didn’t simply add a fourth lane, rather than reduce it to two. “Hindsight is a wonderful thing,” he said philosophically. “Maybe the citizens can put forward that motion during our next city hall on the issue in 2018. The citizens should have been more specific.”

Instead the willy, silver-haired fox revealed any potential added traffic congestion from the change was all part of his master plan.

“Now motorists have no excuse to ditch the gas-guzzlers and get outside in the rain with the rest of us,” Robertson declared, pointing to the City’s recent $35 million redevelopment of the Burrard Bridge which saw the number of lanes reduced from 6 to 4, a resounding success that led to a tripling of traffic congestion in the area. “Soon Vancouver will have no cars left, only bikes, and then we can begin phase 2,” he added cryptically.