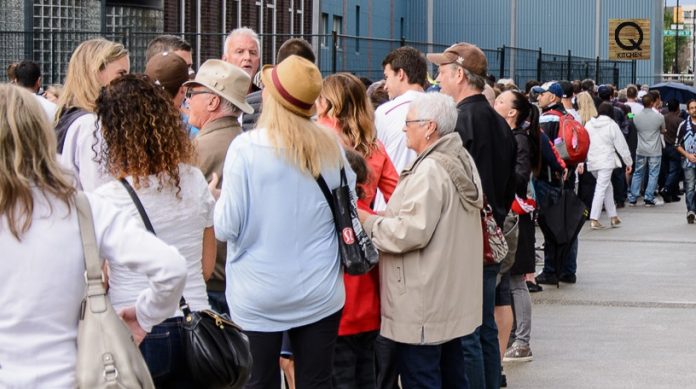 A BREAKFAST cafe, which recently opened in Downtown Vancouver, proudly claims to have the longest lineups in the city, averaging up to three hours.

Despite possessing an impressive 7,000 sq. ft. dining area, the cafe simply named “Q”, contains only one table, which seats “up to four” according to their website. Owners, Gloria and Eoin Kozan deny that limiting the diner’s capacity to four is “restrictive” and claim the idea simply “hit them” while investigating restaurant operating costs. “Our market research showed us that it is really, really expensive to run a business in Vancouver,” Mrs. Kozan told FM News. “We find this to be a more cost effective, and quite frankly, convenient way of creating demand. In Vancouver it’s standard practice.”

Customers hoping to visit the Gastown based breakfast joint, face up to a 4-hour wait on Saturday mornings, with that figure practically doubling for Sundays. Q’s “please wait to be seated” sign stretches across one entire block, while 2 blocks of Cambie street has been pedestrianized in order to facilitate waiting customers. A large number of local food trucks have also relocated to the area in order to serve the growing lineups.

The new “micro-cafe”, enters Vancouver’s already hyper-competitive industry of breakfast dining lineups. As Vancouver’s restaurateurs stubbornly refuse to expand, lineups have grown exponentially in the last 5 years. So much so, that Statistics Canada estimates that the average Vancouverite now spends almost a quarter of their week, waiting for breakfast.

Sociologists and behavioural psychologists believe Canadian over-politeness is the prime factor in the general acceptance of lineups. For Vancouver particularly, Albertans blame the city’s notorious “liberal-softness” as the reason for their “strange cooperation” with the practice.

Unperturbed, local yogis have praised the cafe’s 4-person policy, saying it “perfectly suits” the yoga lifestyle. “Well, medically speaking, standing for 4 hours is great for one’s posture,” claims one of Q’s best customers. “But also the wait teaches us the practices of extreme patience and starvation, two of the cornerstones of yoga.”

The cafe even provides individual yoga mats for waiting customers. The mats are then ground down, steamed, and served with quinoa and kale as an appetizer, a dish critics have described as “extremely questionable.”

Where do you like to queue for breakfast and for how long? Let us know on facebook – FM News