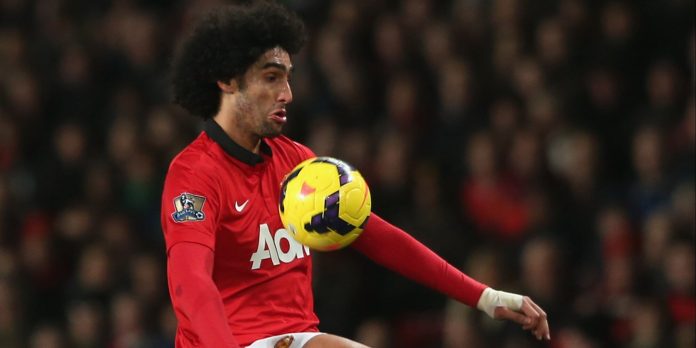 Manchester United manager Louis Van Gaal, has cast doubt over the future of Marouane Fellaini after suggesting the midfielder is “shit again”.

Having lost their last 3 Premier League games against Chelsea, Everton and WBA, there were widespread reports in the media on Sunday, that once again, Marouane Fellaini is a £28 million flop. The gangly Belgian’s mini renaissance ended when Van Gaal called into the BBC’s World Football Phone-in to confirm that the press rumours were once again correct: “I always knew he was shit, but he does fit into my philosophy.” When pressed on what Van Gaal’s philosophy actually was, the enigmatic dutchman was coy. “My philosophy is to be as random as possible. How can my opponent know my hand if even I do not know it? It’s poker 101.”

Angel Di Maria has cited Fellaini’s bizarre inclusion in the starting lineup as the reason for his spectacular loss of form:

“The red devil himself has been sent to stop me from reaching the upper echelons with Ronaldo, Beckham and Owen. This beast is in the form of the Fellaini. He is making me play worse than Bebe. Seriously did you see me against West Brom?”  – Di Maria speaking to the Guardian.

Fellaini himself seemed philosophical about the fickle nature of football punditry. “I knew it wasn’t going to last forever. I’m surprised I’ve made it this far to be honest” he said.

Fellaini’s position at the club now seems untenable. “I like him but I’m unsure if playing him in attacking midfield is crazy enough. Maybe we need him at left-back? Maybe in goals? His hair takes up a lot of room.” Fellaini was equally unsure. “Well clearly I’m a League One player at best so I’ll just ride this out for however long I can. Hell Michael Owen was here for 3 seasons…..”