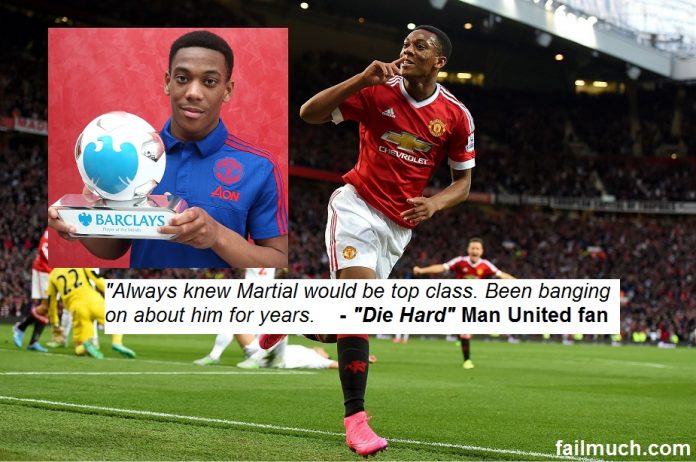 A self-professed “die hard” Manchester United fan, has been forced to deny allegations he once doubted the wisdom of the club’s deadline day swoop for Anthony Martial.

Speaking to reporters from his local pub, the 29-year-old man claims a series of tweets, which questioned the rationale of breaking a world record for a player with less than 50 competitive matches under his belt.

The man known locally as Thomas, told FM Football News: “Those accusations are lies spread by jealous City fans. I never doubted Tony for a second. I knew £58 million was a bargain for a player of his quality.”

Red Devils’ fans quickly took to social media to voiced their disgust at the “plastic fan”, while simultaneously proclaiming they had “no misgivings” about the Frenchman’s potential.

The series of alleged tweets from the man in question, reportedly began at 12:01am on Sep 2nd with numerous “close sources” claiming he tweeted: “58 fooking million pounds for some Bellion rip-off? Fuck off Louis, you bell-end. #VanGaalOut”

“Oi Louis. Get that French clown off now, you fucking twat. Never liked the look of him. What a waste of money.”

Today the man’s current timeline contains no trace of the tweets. Although one tweet, sent after Martial scored the winner in a 3-1 win over Liverpool, appeared to strengthen the man’s case:

“What a wonder goal!!! Martial’s the new Henry! Knew this lad was gonna be top class! Been banging on about him for months. #NeverDoubtedHim #Louis4Life”

Even more damaging to the man’s credibility, has been his widespread endorsement of Depay, as “the new Ronaldo”. “I got that one wrong,” he admitted. “I really thought Memphis was world class, from watching him for years in the Eredivisie. But 4 goals in 13 games for a 21-year-old is not good enough. His career is finished.”