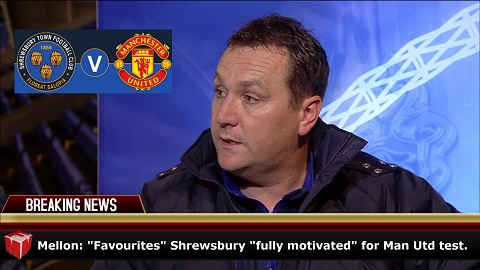 SHREWSBURY Town manager Micky Mellon has played down his side’s favourites’ tag ahead of their eagerly anticipated FA Cup clash with Manchester United. “I know people are expecting us to steamroll Man United but it might not be that simple,” Mellon said. “We’ll still have to turn up and do a professional job against them.”

The Shrews’ boss denied that his players might suffer from a lack of motivation against the 11-time FA Cup winners. “My players are fully motivated to win, no matter who the opposition are,” he said. “Whether we’re playing Fleetwood in the League or Man United in the cup, my players will always give 100%.”

While he confirmed that he will use the game as an opportunity to rest some first team players, he reiterated that his players “fully understand” the threat ahead: “Yes, a few young players will probably be given a chance, but we don’t want to underestimate this United side. There are still Champions League winners in that team so we will need to be at our best to win.”

Currently lying 19th in League One, 5 points clear of the relegation places, Shrewsbury Town are heavy favourites with the bookmakers following Man United’s disastrous season. With the Red Devil’s injury crisis mounting, boss Louis Van Gaal admits his side are “up against it” but believes his players are capable of getting a result at the New Meadow. “Listen, obviously we knew when the draw was made that we were going to be up against it, but all I can ask is for the players to put on a performance for the fans.”

The United manager also insisted that his side will go “all out” for a win, despite the potentially lucrative replay on offer for a draw. “Financially speaking, of course a draw would be a great result for this club and it would also be great for our fans to bring Shrewsbury to Old Trafford. But we must try and win and keep our FA Cup dream alive. It is important that a club of this stature remains in the Europa League too.”