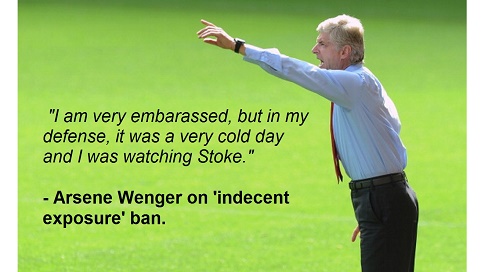 The English FA are set to ban Arsene Wenger following an incident in Arsenal’s 2-0 win over Stoke City. The shocking moment caught by a fan, was missed by the match officials and television cameras and clearly shows Wenger exposing himself while standing at the edge of his technical area. The FA confirmed a 10 game touchline ban, which Wenger is not expected to appeal.

Speaking to 5live after the game, Wenger apologised to the fans, saying he was “deeply ashamed” of his behaviour: “I am very sorry and incredibly embarrassed,” he said, “but I am begging the Arsenal fans to not judge me. It was a very cold day and in fairness, I was watching Stoke. Also, Charlie Adam was on the pitch which obviously affected my performance.”

Mark Hughes hit out at Wenger blaming his side: “I think it’s easy for Arsene to attack the way my team looks to cover his own shortcomings. Stoke City have come a long way since the dark days of Rory Delap. We have Shaqiri, Bojan and Jon Walters now. Raw sex appeal is what Mark Hughes brings to a team.”

An FA announcement said there was a precedent for the ban, after UEFA retrospectively banned Avram Grant for teabagging Martin Skrtel, during Chelsea’s 2008 Champions League win over Liverpool. Greg Dyke said the rules were pretty clear:

“The FA handbook clearly states, that as of June 2013, no player, manager, spectator or match official shall remove their member with 10 yards of the field of play. Mr. Wenger is clearly in breach of this rule so the Premier League won’t be seeing any part of Arsene for 10 games.” – Greg Dyke

Wenger initially claimed that by exposing his penis, he was simply signalling a tactical change to his players. “I was trying to tell them that our tackling was too hard and that we should try a softer approach,” he said. “I have always done this as so many of my players have had penis-related names. Lee Dixon, David Ospenis, Theo Wallcock. Tomáš Rosdický, and David Semen to name a few. If the FA have a better way for me to communicate with Francis Coquelin, I’d like to hear it.”