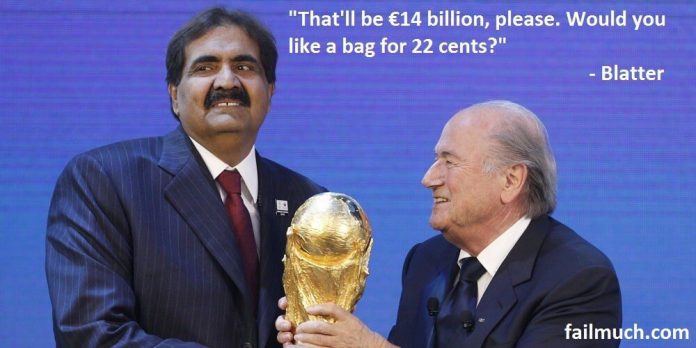 Fifa president Sepp Blatter has sensationally announced that he will not seek re-election and will resign from his position immediately.

Suspicions of a shock announcement had been circulating this morning, after Fifa held an EGM yesterday at FIFA headquarters in Zurich. Blatter told an emotional FIFA Executive Committee, “After much soul searching, I have decided that I, Sepp Blatter, have been a selfish man. A man of my honour, integrity and humility should not restrict the world’s consumption of me to one outlet. I must spread myself across the globe and help the most vulnerable aspects of life.” Blatter continued: “Many avenues are open to me. Two critical issues of primary importance to me are Russian and Qatari tourism. Also the world oil supply is dangerously low. I want to be on the forefront of discovering more oil.”

Blatter has previously been defiant in the face of mounting criticism from the worldwide media (particularly the English media). In response to allegations of corruption with the Qatar 2022 World Cup bid, Blatter said,”I have been accused of being like an old dog that is unable to learn new tricks, but it is this old dog that must lash out like a ravenous beast at those who try to muzzle him.” Blatter pointedly ridiculed the English media and also refused Irelands noble request to become the 33rd team at the 2010 World Cup. Blatter also attacked other aspects of Irish life. “Look at their food and how pale they are. These little ginger people cannot be trusted.”

“Blatter out” Facebook groups such as REDforFIFA, had been calling for Blatter’s head and will no doubt be delighted at the “Sepp Blatter to resign” announcement.

Blatter has thrown his backing behind John Terry.